Tapping into the Secret Language of Plants 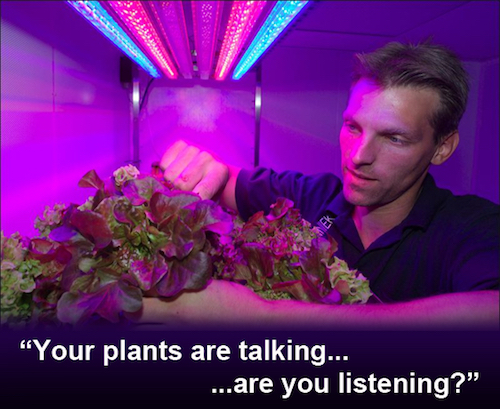 Over that past week I’ve had the great honor of working with both the good people at the North Dakota Bankers Association in Bismarck, ND and the good people at Rabobank in Napa, CA on the rapidly evolving topic of the future of agriculture.

Growing up on a grain farm in the little town of Mobridge, SD is an experience I wouldn’t trade for anything. But over the past several decades, the farming profession has evolved into a very sophisticated industry, with technology permeating virtually every aspect of the seeding, growing, and harvesting of today’s food production systems.

U.S. farmers are clearly on the cutting edge of the world’s ag industry, an industry now tightly interconnected with global distributors and food manufacturers who are insuring a far safer and more durable food supply chain than ever in the past.

Our mobile communication systems are just beginning to make these connections, and on a certain level, this back and forth information flow becomes a rudimentary form of language between us and our plants. Little did we know, the plants have always been talking, but we haven’t been listening.

Over the past several weeks I’ve written extensively on the topic of smartphone peripherals and how the use of smartphones will expand by over 1,000% in the coming decade.

We now have over 1 million mobile apps available for download.

Putting this into perspective, the whole mobile apps revolution began in March of 2008 when Steve Jobs announced the software developer’s kit for the Apple iPhone. When Apple’s App Store officially opened on July 11, 2008, there were a whopping 552 apps to choose from.

To say the apps were an instant success is a gross understatement. Over 60 million apps were downloaded within the first 3 days and tech companies around the world began to sense a market shift. Little did they know how much, and how many industries would be affected. As of today, over 20 billion apps have been downloaded and there’s no end in sight.

But the piece getting very little attention is the exploding field of smartphone peripherals that extend our current communication systems far beyond simple person-to-person communications.

While there are literally thousands of peripheral devices either in existence or being contemplated for the marketplace, I’ll focus on just a two pieces of technology – smart dust and smart contacts – to illustrate the transformations about to take place.

In the 1990s, Kris Pister, a researcher at UC Berkley dreamed up the idea of sprinkling the Earth with countless tiny sensors, no larger than grains of rice.

These “smart dust” particles, as he called them, could be used to monitor everything. Acting like electronic nerve endings for the planet and fitted with computer processors, sensing equipment, wireless radios, and extended life batteries, smart dust would have the capabilities of providing huge volumes of real-time data about people, cities and our natural environment.

HP will take its first step toward this goal in about two years, according to Pete Hartwell, a senior researcher at HP Labs in Palo Alto. The company is under contract with Royal Dutch Shell to install 1 million matchbook-size monitors to aid in oil exploration by measuring rock vibrations and movement. The sensors, which already have been developed, will be spread over a 6-square-mile area.

That will be the largest smart dust deployment to date, he said. 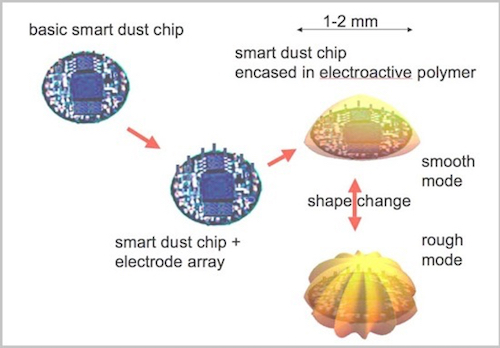 Beyond the grandiose dreams of Pister and others, in it’s simplest form, smart dust consists of a sensor combined with a wireless transmitter and some kind of power source. Many are envisioning the power to come from wireless RF signals. 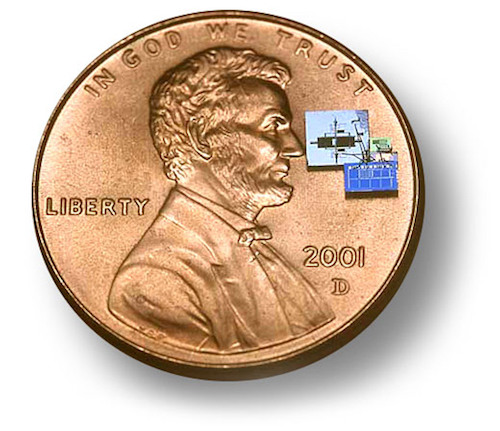 Future designs for smart dust will have them detecting everything from moisture content, to soil temperature, to chemical composition.

Farmer’s fields will be glowing with information. Whereas most have had the option in the past of selling “rights” associated with the land – water rights, mineral rights, and now wind rights – future farmers will also have the option of selling information rights.

Information gleaned from smart dust will be far more granular and instantaneous than any current information gathering technologies.

Data streams coming from these plants with give them a “voice” that will help us better understand the idiosyncrasies of plant life.

The idea of “smart” contact lenses, the kind that can superimpose information on the wearer’s field of view has been around for a while. But contact lenses are also being developed that use embedded sensors and electronics to monitor disease and dispense drugs. Such devices may eventually be able to measure the level of cholesterol or alcohol in your blood and flash up an appropriate warning.

By adding tiny light-emitting elements to contact lenses, it is becoming possible to map digital images directly onto the wearer’s field of vision to create a heads-up display or augmented-reality overlay that requires no glasses, screen or headset.

The first iteration of smart contact lenses are already on the market. The Triggerfish, created by Sensimed, a spin-off from the Swiss Federal Institute of Technology in Lausanne, is a wirelessly powered contact lens designed to help people with glaucoma manage their treatment. It does this by continuously measuring the curvature of the eye over a 24-hour period using a tiny strain gauge, built using micro-electromechanical system (MEMS) technology, which is incorporated into the lens. 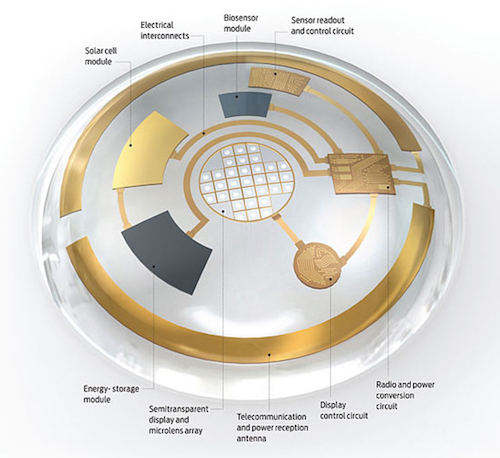 Our demand for information is growing on a daily basis. Using devices such as smartphones and tablet computers to display what we are looking for is slow and clunky at best. With a constantly surging trend line towards creating a seamless and invisible interface between the information world and our brains, one of the tech geek’s ultimate forms of display technologies will be the smart contact lens.

Designs for future smart contacts include a complicated array of input, display, storage, and transmission technology. But once connected wirelessly to the processing power and send/receive capabilities of a nearby smartphone, the very real possibilities for smart contacts being used as a replacement for current handheld displays suddenly comes within reach.

Does it sound appealing to look at a plate of food and see the nutritional value and calorie counts as illustrated above?

If you could add additional information to your normal field of view, what would you want to see? Would it help to have people names flash before your eyes, along with other personal information, just before you meet them? Would you like to have instant access to weather reports, driving directions, or the latest episode of your favorite TV show?

These are exactly the type of questions you’ll be asking yourself when this technology comes into play. And it’s not that far off.

In the future, using smart contacts, you will not only be able to “listen” to the data coming from your plants, but you will also be able to visually “see” what they’re telling you.

The language of plants will come into full view as we add additional sensors, probes, and other signaling technology.

The crazy people of the past, who spent every waking moment of their day talking to their plants, will suddenly seem a tad bit more rational, as we move down this relentless path towards understanding the secret language of the plant world.

The information we uncover will undoubtedly surprise of on every level.