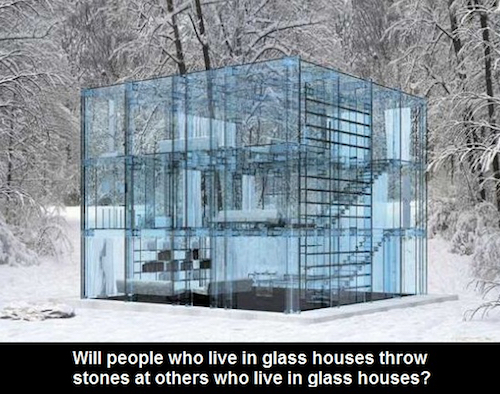 A report issued Tuesday by the Insurance Institute for Highway Safety boasted of the fact that red-light cameras were responsible for a significant drop in highway fatalities at the intersections where they were posted.

With this one well-crafted report, a document proving they save lives, the red-light camera industry established a beachhead in American society.

Naturally there was no mention of the lives that have been destroyed, marriages ripped apart, or the economic drain on the communities surrounding them because of the onerous fines imposed. Saving lives virtually always trumps the carnage of enforcement.

The issuance of the red-light camera report follows a repeatable pattern in business where a controversial enterprise with substantial cash-flow devises a brilliant strategy for justifying their existence.

Transparency creates its own economies. Whether or not red-light cameras are a net-positive or a net-negative for society is less important than the fact that we are making a dramatic shift towards micro-monitoring human actions.

With every new technology that expands the realm of human transparency, enterprising people quickly follow with systems designed to capitalize on any human deviation from the newly established norms.

The Coming Age of Micro-Transparency

With improved sensor technology, it’s easy to envision parking spaces that come with their own enforcement. Once parked, you have 45 seconds to pay for the space. If you park outside of the lines, you will be fined. If your car remains even one second past the time you agreed to, you will also be fined. Any piece of trash that lands in your space during your parking time will also be cause for additional penalties.

To some, this is a highly needed “take-ownership-of-your-actions” accountability standard to be imposed on everyone around us. To them, the world will be far better place if people are held to a higher standard.

To others, the risk of penalty far outweighs their value to society. They will choose to avoid activities that require them to park in spaces with that kind of liability.

Compare that type of parking space to one where you can come and go as you please and you are seamlessly charged for time spent parking. One is a services-rendered model, the other a compliance-driven with penalty model.

In a society where both models are allowed to exist, transparency becomes the arch enemy of anything with penalties. Since people are an inexact species driven by emotions and spur-of-the-moment decisions, any attempt to over-regulate the humanness of our actions will be met with extreme resistance.

As we move further down the transparency spectrum, it’s not difficult to imagine surveillance systems that monitor us constantly.

Again, every breakthrough in transparency-related technology creates its own economies. If allowed, each level of personal intrusion will be accompanied higher and higher thresholds for compliance…. until we reach a breaking point.

While a few inspired individuals have pushed the notion of radical transparency, living in a world where we are all equally exposed to the nth degree, this is simply not an achievable objective.

However, in an imperfect world, transparency cannot be distributed equally, and those with less transparency will always have a significant advantage over those with more.

In a peace-loving community that exists without any guns, the person who arrives with a gun, and is willing to use it, has a significant advantage over everyone else.

Similarly, in a business environment where everyone follows the rules, the person who is willing to ignore the rules has a significant advantage over everyone else.

At some point, when the designated elite can hide behind the veil of privacy and others cannot, transparency becomes a lethal weapon.

Rule-Breakers are Our Heroes

“Failure is the condiment that gives success its flavor.” – Truman Capote

Browsing through some recent college course catalogs it occurred to me that for all of the colorful characters in the history books, no one is currently teaching classes on the fine art of rule-breaking.

Virtually everyone who makes it into the history books is a rule-breaker. Yet for all the accolades we heap upon past rebels who zigged left when everyone else zagged right, those luminaries responsible for much of the world we live in today, we have not bothered to turn rule-breaking into an noble profession.

As counter-intuitive as it sounds, someone needs to create the official rules for becoming a rule-breaker. We can learn much from the inspired paths of these past contrarians.

Our Need for Rules

Before plotting a strategy for breaking rules, we first need to understand the reasons behind the rules, and the risks that come with breaking them.

Rules create order. They create the inter-relational fabric of society around which all of our actions are woven.

When rules are too harsh, and crudely enforced, they cause people to live in constant fear, forcing a regression of arts and sciences.

When rules are too lenient and loosely imposed, they provide an equally poor structure for the advancement of culture and knowledge.

Corporations are formed around rule structures that guide people through their working days. Like many other aspects of life, company rules can either be a net-positive or a net-negative. Too often businesses create layers of rules that keep bright people from doing new things.

Rules create stability, but rule-breakers are constantly looking for the next revolution they can unleash.

A Funny Thing Happened on the Way to My Failure

“Restlessness is discontent and discontent is the first necessity of progress.
Show me a thoroughly satisfied man and I will show you a failure.” – Thomas A. Edison

Rule breakers need to be able to make mistakes, but transparency increases the pain threshold for making those mistakes.

Its sounds good when business people talk about wearing failure as a badge of courage, and how we can improve our success ratio by failing faster and failing smarter. But, in all likelihood, the next generation of transparency won’t even let us get to that point.

As Thomas Edison so aptly reminds us, there are valuable lessons to be learned from the things that don’t work.

Failures are not inevitable, and failure to one person is success to another.

When the learning process that comes from failure is aborted prematurely, the failure is destined to repeat itself.

The Coming Collision of Transparency Advocates and Rule-Breakers

Transparency is entering our lives at a relentless pace.

As we continue to transform into human information nodes, we find ourselves constantly radiating information. And this information is being detected, logged, and analyzed for use in unusual ways.

The driving forces of those wishing to monetize transparency will find themselves in a full-scale cyber-war with those who have reached their limit. And it may involve much more than online battlefields.

Growing up as young people we are constantly testing our limits. We are testing the limits of how much we can eat or drink, how little sleep we can get away with, how fast we can run, and even how many people we can date simultaneously. We structure competitions, such as track and field events and academic challenges, around finding who has the highest limits.

Without testing our limits, we can’t possibly know what they are.

We are all terminally human, and our learning styles and thought processes vary tremendously from one person to another. As such, we need enough runway to fall on our face a few times before we understand our limits.

The world is changing and limit-testing is our way of informing us how to behave in the future. Our understanding of these evolving new rules are valuable insights worth learning.

Transparency has an insidious way of encroaching on our space and exposing our foibles to the rest of the world.

Most of humanity has a built-in lemming gene that causes them to go with the flow. But once the pain threshold reaches a certain point, even the lemming genes won’t contain the fury.

Strap yourself in, it’s about to get messy.