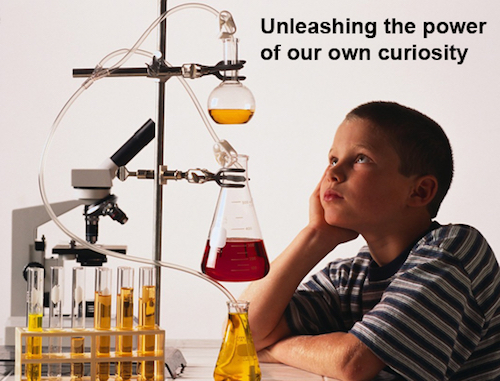 “If a teacher can be replaced by a machine, they should be.” – Arthur C. Clark

In 1999, Professor Sugata Mitra embedded a computer in a wall in a slum in New Dehli, connected it to high speed internet and left it there. Kids in the area, mesmerized by this technology, learn to use computers by themselves.

Over time his work has become famously referred to as the “Hole in the Wall Experiment.” He repeated this experiment in other parts of India and discovered how kids learn what they want to do.

His online videos of kids interacting with these computers have become the source of considerable discussion with one showing children recording music and playing it back for others only four hours after seeing the computer for the first time.

One experiment he did in Hyderabad, India involved asking kids who spoke English with a strong Telugu accent to use a voice recognition system on a computer. Since it didn’t recognize many of their words initially, he told them to speak so the computer could understand them. And then he left. When he returned two months later, their accents had changed and were closer to the neutral British accent required by the speech synthesizer.

In a conversation that Mitra had with the late Arthur C. Clarke, Clarke commented that, “If a teacher can be replaced with a machine, they should be.” And Clarke told him that a student’s interest is the most important thing in education.

Clarke instinctively knew that a student driven by their own curiosity will learn more, learn faster, and retain far more than when they are confronted with subjects of low interest.

In 2008, Roger Bohn and James Short, two researchers at the University of California in San Diego decided to do a study to determine the amount of information people have entering their brains on a daily basis.

They added a rather interesting twist to the study. Because of the varying forms of information, and the difficulty in comparing video to magazines and newspapers, they decided to convert all information into one standard form of measurement – words.

Based on their final 2009 report, the average person in the U.S. has 100,500 words flowing into their heads on a daily basis. And this number is increasing by 2.6% per year.

So where are all these words coming from?  In rough terms, 41% come from watching television, 27% – computers, 18% – radio, 9% – print media, 6% – telephone conversations, 4% – recorded music, and smaller amounts from movies, games, and other information sources.

As it turns out, the average American spends 11.8 hours every day consuming information. Many other countries are posting similar numbers. People today are being exposed to far more information than ever in the past.

Buried deep within the “other category,” constituting far less than 1% is formalized education. Even for students attending college, their classroom studies constitute a relatively small percentage of the information they are exposed to on a daily basis.

In the midst of this vast river of information we have flowing into our minds is a certain pedigree of information coming from scholarly people, constituting our formal education.

So why is this information considered far more valuable than all of the other information we are exposed to on a daily basis?

The Cost of Words

However, each one-hour class is actually only 50 minutes, so that 16 hours of contact time is really only 13.33 hours of real time. Most Bachelor’s degrees require 124-128 credits to graduate. That’s typically 31-32 per academic year.

On the extreme high end of society, if someone spends $10 per day ($300/month) to be connected to media – cable TV, radio, newspaper and more – they are spending, a total of $99.50 per million words.

At this rate, the word-cost for a person attending an Ivy League School is 157 times as expensive as the words being consumed by an extremely well-connected person.

While this may be considered by many to be pretty fuzzy math, the value of a university education is now totally out of sync with the rest of the information world. 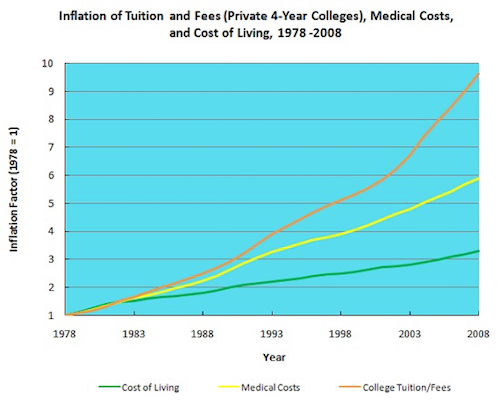 Students and their families are finding it increasingly difficult to afford college, forcing them to be more pragmatic in their decisions:

Yes, it comes from a trusted source, a college or school, with some very bright people staking their reputation on its accuracy. But there are many other trusted sources of information backed by the people who produce it such as newspapers, books, magazines, statistical journals, and video documentaries.

Yes, college classes are packaged in a comprehensible form making them easier to digest. Even though many college students would argue with the easily-digestible part, we will give them points for better course design. However, many non-school organizations are presenting information in similarly comprehensible formats for far less money. Think webinars, workshops, and non-accredited training centers.

More importantly, other organizations are doing a far better job of matching the curiosity of the learner with the subjects and experts they are interested in.

Over the years colleges have become a magnet for intensely bright people. Faculty and staff are bestowed with enviable status and given high rankings in nearly all social circles.

Elitism has its privileges, and smart people have influence.

Colleges around the world have done a masterful job of fortifying their position in society by creating countless forms of governmental subsidies and devising elaborate schemes for student loans to buttress the financial underpinnings of this enlightened house of cards.

However, even well-fortified positions can collapse quickly. The newspaper world was filled with some of the brightest people in the world, fully-integrated into all aspects of society. Yet even with their low-cost word stream, the industry has shown itself to be unsustainable in this ultra-competitive new world.

Newspapers did a poor job of meeting the demands of the emerging hyper-individualized curiosity-driven consumer. Our education systems are doing an equally poor job.

In 2009, a study done by SRI International for the U.S. Department of Education concluded that students in online learning conditions performed better than those receiving face-to-face instruction.

In much the same way that iTunes and YouTube have created curiosity-driven systems for consuming music and video content, a new system will arise on the Internet that will enable curiosity-driven students to consume courses.

iTunesU is already making major inroads into this space.

Communication technology today is designed around the two-way flow of information. People are no longer satisfied, or trusting, of one-way information systems like that employed by colleges and traditional education systems. They want to participate, contribute, and take ownership of content.

They are most interested in letting their curiosity be their guide.

More on the “Hole in the Wall” Experiment

Prof. Sugata Mitra, currently a Professor at Newcastle University in the UK continues to probe the capabilities of the self-learners.

At one point Mitra started asking the question, “How difficult a task can students take on?” So he decided to find out.

In the small village of Kalikuppam, Mitra decided to see if Tamil-speaking children could learn about biotech in English on their own. After two months, the students sheepishly told him they’d learned nothing. He asked whether they’d learned nothing at all, and a twelve year old girl told him, “Apart from the fact that improper copying of genetic molecules could cause disease, we’ve learned nothing.”

Students took biotechnology exams and scored a 30, where they’d scored a 0 before… “an educational impossibility.”

He asked one of the best students to teach the others and improve their schools. She asked how she could possibly teach them, and Mitra suggested “the grandmother method” – stand behind, admire, act fascinated and praise. After two months, the class score was up to 50.

Mitra is now conducting experiments in the UK, with students at Gateshead school. Students work in groups of four, using one computer, and can switch between groups.

One group started solving GSCE (General Certificate of Secondary Education) questions within 20 minutes. The least successful group took 45 minutes. They were using online tools like Google, Ask Jeeves and others.

Traditional teachers, however, are still skeptical. “Is this truly deep learning?”

But Mitra has seen evidence that test scores will rise over time with groups like these, and believes that students have near-photographic recall because they are learning together at a time when their curiosity has been peaked.

Wilhelm Konrad von Roentgen became famous for “accidentally” discovering x-rays. Roentgen found something in nature that seemed useless, but fascinated him. He devoted countless hours to studying how electrons move from one point to another within a gas. He did this because he had an amazing sense of curiosity that was driven by a need to understand nature.

X-rays weren’t discovered by chance. Chance is when something comes from nothing. Yes, his discovery was serendipitous, but it was followed by a lot of hard work. Today, a scientist in a similar situation would be confronted with the challenges of finding the funding to proceed with this type of research.

Roentgen’s story is a classic example of a scientist who didn’t begin with a well-defined question. So, how do we remove the constraints and incentivize people to build on a hunch, with the remote possibility that their hunch may lead to an enormous breakthrough in society?

We do it by creating systems that empower our curiosity.