The Day that Google Died 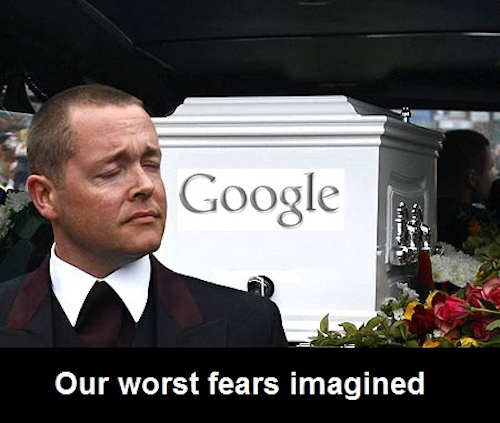 It was a frenzy of activity as workers scurried from office to office, making their final checks, gathering books, papers, and personal belongings. Many were still stunned over the announcement that Google was closing its doors. The final minutes before the deadline were reserved for tearful hugs and remorseful goodbyes, but for the people of the world these brief moments of stunned silence would soon be replaced with long term anger and outrage.

A mere three weeks earlier this one-time tiny search engine company that overnight had grown into a goliath on Wall Street had appeared to be an invincible force on the global business stage. But now after wave upon wave of well-orchestrated attacks, the giant corporation had fallen to its knees, and in true medieval form, endured the equivalent of a public beheading of its data, its once stellar revenue streams, and its corporate integrity.

Teams of their best data-smiths and strategy people worked around the clock to plug the holes in their sinking ship, but were woefully unprepared for this kind of assault. After weeks of sleepless nights, witnessing one crippling blow after another, a grim new reality began to take hold. In the end, all data had become mangled to the point where it was irretrievable, and all backup systems suffering a similar fate.

TV cameras from around the world watched in horror as a single hand reached up and turned off the final power switch.

With the power turned off, an eerie silence filled the room.

The former giant of global business had breathed its last breath. This was the day that Google died.

The picture that I’ve painted above is a scenario designed to both shock and alarm you. While it is still only a fictional account, it is indeed a real possibility. It may not happen this quickly, or in this fashion, but it is possible.

Recent announcements from Google about massive attacks by Chinese hackers and stories about cyber criminals hijacking over 75,000 computers in one large-scale attack have left us feeling less than secure about our data’s future.

While I have focused on Google, there are many other corporations at risk, and the risks involve everything from the loss of individual jobs to the economic stability of entire nations.

Our governmental systems are evolving at speeds that are exponentially slower than the businesses that use them. They are ill-prepared for the sweeping pace of change and ill-equipped to handle the disruptive forces intent on exploiting every loophole.

Who Owns the Data?

Currently the vast majority of “humanity’s data” lies in the hands of individual corporations. Companies like Google, Amazon, Yahoo, Apple, IBM, and Microsoft have staked their future on the value of the information being collected and archived in their datacenters. They have created the systems for collecting it, and have invested heavily in vast server farms for storing it.

However, if one of these corporations ceases to exist, what happens to all of the information currently residing on the servers?

Thinking long-term, and knowing that only a very small percentage of companies survive long enough to celebrate their 50th anniversary, let alone their 100th or 200th, how much of this information will still exist 200 years from now?

What will our great, great, great grandchildren know about us? Will they even know we existed?

It’s easy to make the argument that information created “by the people, for the people,” should be preserved through some form of public ownership. But that doesn’t make sense in our current state of the world.

No global entity currently exists with the credibility and resources to take on this kind of task. Putting it another way, there is no global entity that would be able to align itself with the speed, creativity, and evolving nature of the private enterprises that create and use the data… without meddling with it.

The Evolving Nature of Data

For the past several decades the format of digital information has been evolving – from 8” disks, to 5.25” disks, to 3.5” disks, to CDs, stick drives, tape drives, and more. Few of these formats will still exist even 10 years from now.

One of the ideas behind cloud computing was to free users from the ever-changing nature of storage devices by using remote storage in server farms far, far away. Changes that happen inside the server farm will then be invisible to the end user.

As I have mentioned in a previous article, we are not likely to see an end to the evolving nature of data storage for over 100 years, so there is no end in sight.

What Information is Worth Saving?

One question I wrestle with frequently is the questions, “of all the information we are creating, what should we be saving?” And perhaps more importantly, who gets to decide?

It’s easy to argue that much of what is being posted on YouTube and Facebook is simply crap. It holds no long term value.

However, when we see archeologists fretting over hair, bone, and pottery fragments from centuries ago as they try to puzzle together information about past civilizations, we can argue that today’s “information fragments” hold far more value, and even the meaningless, mindless, and boring stuff will retain tangential significance.

Do we know now what information will be valuable in the future?

How then do we create a long-term strategy for data preservation, and by long-term I mean 1,000 years or more?

The information volumes in storage today are sure to be miniscule when compared to the massive volumes being collected in the future. Not only will we be collecting raw data on virtually every living and non-living object on the face of the earth, but we will be creating information about the information.

As an example, the flight patterns of individual flies or insects may be layered with a system for detecting pattern anomalies to determine if the insects are growing in intelligence over time.

Information about the information can easily dwarf the size of the original data by a factor of a thousand, even a million.

Another critical element in this conversation is the overall cost of data storage. The cost of storing an individual document is just a fraction of a cent, and continues to drop. However, when trillions of documents begin to multiply exponentially year after year, the cost becomes huge.

IDC is predicting that the cost of powering data centers around the world will reach $40 billion annually by 2012. How long before that number doubles, triples, or quadruples? When do we reach a point when we can no longer pay the bill, or can we invent some revolutionary storage system that is a factor of a million cheaper than what we have today?

Building for the Future

As we look at the directions we are headed in, the trend lines are being red-flagged with ominous signals. In addition to the volume and cost issues, the ownership question is sure to haunt us for many years to come.

However, what we are trying to build is something truly impressive – the greatest data archive in all history.

Before the Internet, mankind’s greatest data storage archives were physical storehouses like the fabled Library of Alexandria and today’s Library of Congress.

The coming era of cloud computing is being designed around super-intelligent communication systems that will make information extraordinarily pervasive, incredibly fast, and amazingly cheap. It will serve as the foundation for literally millions of new businesses.

The challenges, as I have pointed out, are huge, and detractors are quick to zero in on the pitfalls. But if not the cloud, then what? What is plan B?

In our current state of technology the cloud looks rather primitive. Some of the industry leaders see it as a Model-T holding together a network of BMWs. But that will change quickly.

In the future, the cloud is where the people will be. It will become mankind’s most valuable resource. Storytellers will refer to it as the mythical city in the clouds or perhaps describe it as the proverbial cloud with a silver lining. But in the end, we will find a million new ways to leverage it, capitalize on it, and integrate it into an inspiring future world that most will be proud to live in.