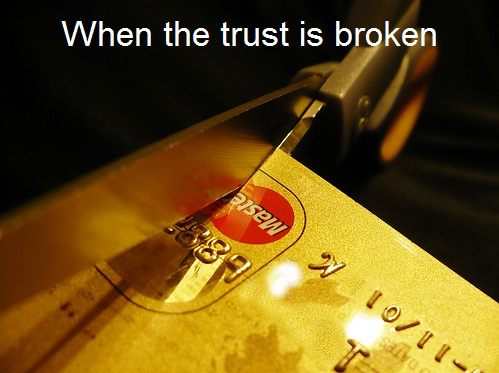 The smell of corruption is offending more than few nostrils

Recent attempts by Congress and the Federal Reserve Board to curb the excessive fees being charged by credit cards, banks, and finance companies have resulted in a punitive industry response with interest rates and fees climbing in almost every category. This action has resulted in nothing short of a full-scale revolt by a victimized-feeling public.

Consumers are slamming on the brakes. Revolving credit — largely made up of credit card debt — fell by nearly 20% in November, the largest drop on record, according to the Federal Reserve. Through October, the number of new credit card accounts dropped 46% from October 2008, according to Equifax.

“Washington doesn’t get it,” said one DaVinci Institute researcher. “People now view banking and credit cards as some of the most corrupt industries on the planet. The length to which they are willing to abuse their own customer base to improve profits is astonishing, and congress has been condoning this practice for years.”

The smoldering flames of animosity behind the credit card backlash are being fueled in part by an equally malicious banking industry. Controversial banking fees have fattened banks’ bottom lines at the expense of our most vulnerable consumers.

At first glance, the arrangement posed by banks seems reasonable enough: Overdraw your account, and the bank will cover the transaction — for a fee. Problem is, consumers don’t get a choice in what transactions get covered and how the fees get assessed. In recent years, as bankers have begun to drool over how lucrative these fees can be, they’ve devised even sneakier ways for consumers to overdraw their accounts, to the tune of $36.7 billion in revenue last year.

Banks have done this by covering debit card transactions as small as $1 and charging a fee as high as $39. Some also charge fees before consumers are overdraw by deducting a purchase when it’s made, instead of when it clears. The timing trick alone has been worth billions. And they’ve nefariously learned to order transactions from highest to lowest dollar amount, emptying consumers’ accounts quicker and trigging more overdrafts.

Another casualty of this war is declining credit scores. From the 3rd quarter of 2006 to the 2nd quarter of 2009, the number of consumers considered “deep subprime,” with such low credit scores they qualify for credit only at steep interest rates, if at all, rose from 34.4 million to 39.8 million, according to Experian.

As the burden of repayment climbs, higher risk individuals paying a higher interest rate will have a higher default rate. Higher payments increase the likelihood of failure. It becomes a self-fulfilling prophecy, when an industry can point and say, “I told you so.”

Yes, the interest rates, overdrafts, and declining credit scores are fueling calls to reform the entire industry. But banks and credit card companies form a powerful lobby, and as distrust over any action taken by Washington grows, and campaign contributions are being dangled by the industry to blunt the outcries for reform, consumers are left with few options and have resorted to taking matters into their own hands.

The backlash is in full swing. Credit cards are being cut up, houses are being walked away from, and the industry is now left holding the bag. In the process, few tears are being shed over industry losses.

So where do we go from here?

Major industry players have set themselves up as easy targets. In the midst of this chaotic backlash lies some tremendous opportunities, and smart entrepreneurs will figure out ways to capitalize on them.

The cornerstones of the next generation financial service industry will be based on attributes like trust, openness, ethics, and credibility. Players that base their company on these founding principles will quickly gain favor among fee-weary consumers.

Long-term winners will forego near-term profits in favor of establishing themselves as a major contender.

Credit cards will be replaced with a variety of easy to use, bank-on-a-chip devices, complete with biometric security and the ability to monitor account activity real-time. Other devices will give consumers real-time access and monitoring of their own credit report.

Look for foreign banks and foreign credit card companies to make a serious play. Some will even come with easy forms for establishing a foreign corporations through which your money can be channeled.

In the end, consumers are okay with paying small fees and service charges. But when customers feel victimized by the companies who have been placed in a position of trust to guard and protect their money, change is inevitable, and it’s happening now.