The Future Library – A Liquid Network for Ideas 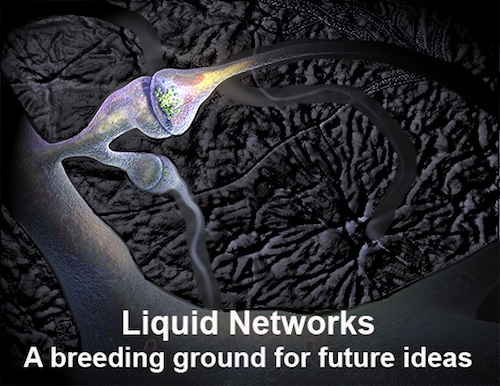 At a recent conference on the “Future of Libraries” put together by the American Library Association at the Library of Congress in Washington DC, I proposed a rather unusual mission for libraries, that of becoming “liquid networks” for our ideas.

Unlike our not-so-distant-past, the world’s most important information is no longer solely in books.

Whenever a great idea forms in our head, we look for a place to put it. Is it something useful, that we can turn into a product, add to a document, tell to our friends, include in a presentation, or attach with magnets to the front of our refrigerator?

Ideas, much like parasites, need a host. If we don’t manage to gaff them before we slip into our next stream of consciousness, they will be forever lost. Without a host, these squirming little idea-fish will have a very limited shelf life.

If we manage to cluster enough of them together, they have a bit more staying power, but they still need to somehow reach critical mass before they become noteworthy.

In the past we had very few options. We could jot them down in a notebook, mention them to friends, or make a few drawings or sketches. But even then, most ideas died of isolation. We had very few “places” to appropriately store these pockets of ingenuity.

Today our options have grown exponentially and good ideas can now go from zero to Facebook entry in 0.9 seconds. They can be fashioned into tweets, infographics, photos, podcasts, PowerPoints, LinkedIn discussions, Quora forums, YouTube videos, submitted to blogs, or turned into interactive charticles.

We literally have thousands of placeholders for our momentary flashes of brilliance. Much like planting seeds into the freshness of damp soil, these memes have the organic potential to spring to life bursting into a colorful bouquet.

However, even with our very best ways of posting and hosting ideas today, the reality is that most public and private companies tend to have a rather short life expectancy, and some concepts come with a far longer gestation period. That’s where the more stable storehouses of information at public libraries comes into play.

When the Library of Congress initially took on the task of archiving Twitter in 2010, there were already a daunting 21 billion tweets filled with words, hashtags, geolocation info, and other metadata. Today the Library has access to more than 600 billion tweets. With about half a billion tweets now flowing into the archive daily, the biggest immediate challenge is finding a way to make all this information coherent and usable.

If you think this is out of character for the Library of Congress, I should point out a few of its other unusual collections:

The Twitter archive is yet another example of the Library’s commitment to collecting first-person accounts of history. The logical next step will be forming more elaborate “liquid networks” for our ideas, a term first proposed by Steven Johnson, author of the book “Where Good Ideas Come From.”

Creating a Picture of the Bigger Picture

Every social network, discussion forum, or live webcast has become a cosmic breeding ground for “liquid networks” and how ideas often have sex with other ideas.

So it’s analogous to thought-blocks giving birth to other thought-blocks. Ideas have a way of creating structures in our minds, and these structures become self-assembling and self-constructing in ways that we have never imagined possible.

Our future is being crafted with human genius in an organic sea where the best of the best have a way of rising to the top.

We have seriously shortened the distance between problems and solutions, pain and comfort, and products and ideas. Over the coming years these timeframes will shrink even further and become far more organic.

The better we become at filtering the signal to noise ration of human epiphanies and leveraging these storehouses of ideas, the quicker we reach what’s on the other side.

How big does an idea have to be to live on its own? If we think of an idea being an organism, what are the elements that make it a living, breathing, self-explanatory, reusable thinking-tool?

As an example, if the ideas was simply “blue,” we would need to know the who, what, when, where, and how to give it context and self-sufficiency.

Famous quotes are a great example of self-sufficient ideas:

Yes, these are rather funny examples, but they say just enough to get their message across.

If a quote has ample meaning, sufficient importance, offers just enough perspective, and is clever and funny, it has the potential to go viral.

So what do we need to create minimum viable ideas that hold sufficient meaning in the lives of others? More importantly, how can one idea be couple to another and used as a building block for something bigger?

Our massive data centers have become a pulsing life form, a vibrant extension of human thinking, fueled by the relentless pipeline of ideas flowing to and from servers, much like synaptical firings, intent on bridging their way to adjoining memory cells.

A recent report from Google indicated that roughly 20% of all searches are ones that have never been conducted before. While it’s not likely that any of us will reach 20% originality in our ideas, it’s far more than zero.

As a result, a constant stream of original ideas are flowing into our data centers, and these ideas are assuming a level of prominence and influence with many poised to explode back into our physical world.

This level of human-computer synergy is still poorly understood. Any form of symbiotic intelligence will be different than we imagine, but at the same time, it’ll be exactly what we imagine.

Similar to an exoskeleton for our brain, it will be the super-participants, those with an innate affinity for tilling the idea gardens, who manage and harvest the fruits of today’s meme forests, that will rise to the top.

As always, those with the most creative ideas are only part of the equation. It’s far less about where ideas come from and far more about where they go as they enter into our emerging “liquid networks” ecosystem. And that is the virgin territory where libraries have a critical role to play long into the future.

The New York City based invention company Quirky, has developed a highly iterative process for people to submit inventions and have others add comments, insights, and additional perspectives to the original concept until it becomes sufficiently refined for an implementation team to start building prototypes.

Business models like this were never possible in the past because social networks didn’t exist, creating a transparent process wasn’t possible, and the time delays of slogging through a snail mail network would cause everyone to lose interest.

Using libraries as a focal point for idea sharing is something new, and creating an environment for clustering great epiphanies could be hugely valuable. Unlike private companies with life expectancies measured in decades, libraries have a more far-reaching purpose, serving their constituencies over lifetimes measured in centuries.

We’ve never really had the benefit of tapping into an idea archive in the past, so this will be unchartered territory for the world ahead. It will also be a breeding ground for sparking new epiphanies.

Every new business that gets launched happens as a result of an epiphany. Similarly, every new product idea happens as a result of an epiphany. For this reason, when it comes to solving some of the world’s biggest problems, it’s in our best interest to create new epiphanies faster, better, and cheaper than ever before. And libraries can become the catalysts for these liquid networks of the future.