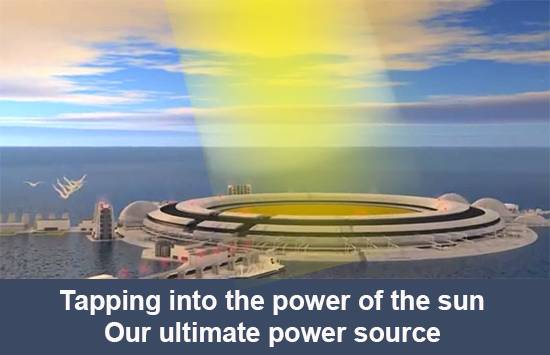 Earth’s appetite for power continues to grow. Since the 1960s, power consumption has quadrupled around the globe, with many countries opting to build large oil and coal plants to meet the demand.

But for Japan, a burgeoning economy without large oil and coal reserves, after the Fukushima disaster occurred, an in-depth review concluded the most viable long-term strategy was to focus on spaced-based power systems.

The vision of harvesting solar power from space and beaming it to earth has been around ever since Dr. Peter Glaser first proposed it in 1968. After considerable research in the 1970s, scientist concluded it wasn’t a viable concept just yet because technology hadn’t advance enough. The materials were far too heavy, and it would have required over 100 astronauts working with thousands of crude robots to create it.

Since then, technology has advanced in countless ways, not only making it doable, but for Japan, making it the best available option for controlling its own destiny.

What most people don’t realize is that solar panels in space are 10 times more efficient than those on earth because there are no day-night cycles, seasonal variations, or weather issues to contend with.

But here’s where it gets even more interesting. Many other countries won’t be comfortable with Japan having the world’s only expertise in building space-based power stations. Once the first one proves successful, it will become faster and cheaper to launch the next 10, or even 100 of them.

With Japan throwing down the gauntlet, they are effectively forcing China, Russia, and the U.S. to compete in an entirely new kind of space race. Here are a few thoughts on the massive implications of this JAXA announcement.

Beam Me Down Scotty

I’m sure many of the scientists are already imagining what it will look like, peering out over Tokyo Bay and seeing a man-made island in the harbor that is 2 miles across. The island itself will be glistening from the massive net studded with billions of tiny rectifying antennas designed to convert microwave energy into DC power.

Next to the antennas is a large substation that sends vast amounts of power through an underwater cable to Tokyo, to help keep the factories of the Keihin industrial zone humming and the neon lights of Shibuya shining bright.

No, you won’t be able to see the most impressive part, neither the giant solar collectors in geosynchronous orbit nor the beaming microwaves, coming down to the island from 24,000 miles above Earth.

Space-based power stations have been the subject of research and a common theme among the sci-fi authors for decades. But it is now very close to becoming a reality, at least within most of our lifetimes.

Over the next 25 years, Japan is anticipating a number of technology breakthroughs to set the stage for a series of ground and orbital demonstrations leading to the development of their first 1-gigawatt commercial system in space. This is about the same output as a typical nuclear power plant.

Every year of technological advancement brings a drop in the cost of building it. In the 1980s, the cost was estimated to be over $1 trillion. But by 2030, the cost is anticipated to drop to the $20 billion range.

At first blush, most will imagine a space-based solar array powering our energy hungry businesses on earth, but that’s only part of the equation. It can be used to power an entire solar-system of devices, that will grow exponentially over the coming decades much like an Internet of Things in space.

It has the potential not only to continuously deliver limitless amounts of solar energy to markets on Earth, but also to power itself as well as a range of future space applications.

Historically, space missions have been “power paupers” – constrained in design by the limitations of power and the high cost of getting that power. For this reason a wide range of R&D projects have been shelved simply because of their excessive power requirements.

The JAXA power station is estimated to weigh more than 10,000 metric tons and when fully deployed, stretch several miles across. To construct and operate an electricity-generating satellite, JAXA will have to demonstrate mastery of six critical disciplines:

Of these six challenges, the wireless power transmission remains the most formidable. So that’s precisely where JAXA has focused much of its research.

Wireless power transmission has been the subject of conspiracy theories and legends ever since Nikola Tesla’s experiments at the end of the 19th century. Tesla famously began building a 187’ tower on New York’s Long Island in 1901, hoping to use it to beam power to buildings, cars, and dirigibles until his funding was canceled by J.P. Morgan.

In 1960, William C Brown, the inventor of the cross-field amplifier, used a remote control helicopter to demonstrate his breakthroughs using wireless microwave power on the Walter Cronkite 6:00 pm news. Citing Tesla’s same logic, Brown was convinced this was the wave of the future.

The reason for converting energy to microwaves is because it’s impervious to weather condition and water in the upper atmosphere. In its broad-beam form, microwaves become safe for birds and insects to fly through.

Microwaves also have an efficiency advantage. Typically power has to be converted twice: first from DC power to microwaves aboard the satellite, then back to DC again on the ground. In lab conditions, researchers have achieved about 80% efficiency in this kind of power conversion, which is far better than with other forms of power. 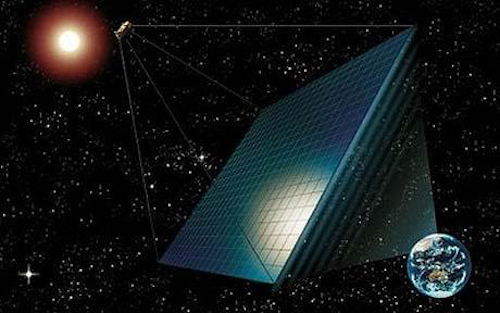 JAXA researchers are working on two different approaches. The first one involves a huge square panel (measuring over 1 mile per side) that is covered with photovoltaic receptors on the top and transmission antennas on the bottom. This panel will be suspended by 6-mile-long wires connected to a small bus, which will house the satellite’s controls and communication systems.

Using a technique called gravity gradient stabilization, the bus acts as a counterweight to the huge panel. The panel, which will be closer to Earth, will experience more gravitational pull down toward the planet and less centrifugal force away from it, while the bus will be tugged upward by the opposite effects.

This balancing of forces will keep the satellite in a stable orbit, requiring a less-active control system, saving millions in fuel costs.

However, this approach still has problems. Since the photovoltaic panel’s orientation is fixed, the amount of sunlight that hits it varies greatly as the geosynchronous satellite and Earth spin. 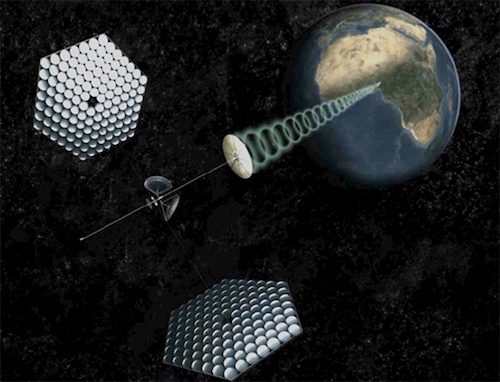 For this reason, JAXA has come up with another more sophisticated approach that solves the solar collection problem by employing two huge reflective mirrors.

The mirrors will be positioned so they can direct light onto two photovoltaic panels 24 hours a day. The two mirrors will be untethered from the solar panels and the separate transmission unit, requiring a far more advanced navigating system to keep them properly aligned.

As one researcher put it, “We already have the ability to perform docking maneuvers with large objects like docking the International Space Station, but coordinating the positioning of kilometer-scale structures is a huge step beyond today’s docking procedures.”

Final Thoughts – The Battle to Be First

Call it national pride or a desire to have your name written in all of the history books, but there are always compelling arguments for being first. Creating the first space-based power system will be no exception.

With U.S. influence eroding across Europe and Asia, a space-based power station has the potential to reinvigorate NASA and give a needed dose of excitement to the thousands of space companies that support it.

China has proven that its aggressive posture can accomplish huge projects in short periods of time, so they certainly won’t want to be left out.

Russia’s existing space industry gives it a significant advantage over most newcomers.

In addition to Japan’s obvious top 3 contenders are countries like South Korea, Germany, and France who are likely to recognize the long-term benefit to this technology.

While most haven’t acknowledged it yet, the new space race has just begun.

← Betting on Your Future Self Launching the Whole Earth Genealogy Project →