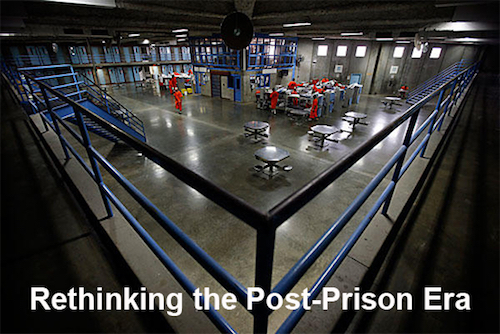 The first time I watched Star Trek and heard Captain Kirk utter the phrase – “Set your phasers to stun!” – it occurred to me that these future weapons featured a number of different settings.

While most people assumed a simple two-position switch with only “kill” or “stun” options, I found myself dwelling on the possibilities of an eight or ten-position switch and wondering what the other options might be. Perhaps they would include stun 1 (with pain), stun 2 (without pain), giggle (make them laugh uncontrollably), amnesia (forget what they’re doing), slo-mo (causing them to move in slow motion), suicide (making them take their own life), seizure (all muscles fire at once), overwhelming guilt (immobilized by guilt and self loathing), or overwhelming pity (suddenly they become your friend).

These may sound silly, but since today’s weapons only have one setting, we have a hard time imagining a technology with more choices.

Similarly, when people show up in court, judges only tend to have one setting for justice – incarceration. With our existing infrastructure built up around jails and prisons, we have a justice system that has a hard time considering other options.

With incarceration rates in the U.S. now reaching epidemic levels, I would like to take you through the exercise of envisioning a world where prisons are no longer an option. If judges no longer had ‘incarceration’ as a setting on their gavel of justice, what kind of world would we live in? Here are a few thoughts. 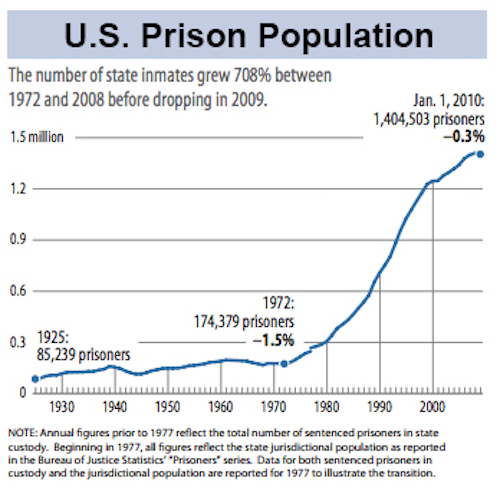 The United States represents only 5% of the world population yet houses 25% of the global prison population. Nearly half of all prisoners in the USA are incarcerated for non-violent crimes.

The positive trend, however, is still only a small blip in a much larger problem. Statistics show the U.S. prison population rose by 708% from 1972 to 2008, a rate far outpacing that of general population growth and crime rates.

This means that 7 million adult men and women — about 4.1% of the total U.S. adult population — are now very involuntary members of America’s “correctional community.”

According to the U.S. Bureau of Justice Statistics the United States still has the highest documented incarceration rates and most overcrowded prisons in the world.

Our current criminal justice system has been developed around several distinct stages, including arrest, prosecution, trial, sentencing, and punishment, which usually involves some form of imprisonment. This is a very expensive process that employs millions of people throughout the entire system.

Rehabilitation is the idea of transforming a person who has committed a criminal act so they won’t do it again.

Rehabilitation can take place at any stage of the system. As an example, when a police officer makes first contact with a criminal, they can impose on-the-spot penalties and warnings. However, the sentencing and punishment stages of the process are where most controversy lies.

Advocates of the status quo argue that there is great value in punishment as a deterrent and even greater value in removing disruptive personalities from society.

The counter argument is that punishment actually leads to greater degrees of criminality, and that prisons themselves become something akin to a college for crime, and people leaving prison are worse than when they went in.

While good arguments can be made on both sides, there is little argument over the cost of maintaining the current system. Not only are taxpayers picking up the cost of police, attorneys, judges, and prisons, but hidden many layers below is the overall toll this system exacts on society.

Prisons separate wage earners from their income, parents from their children, and self-sufficiency from state support. In a paycheck-to-paycheck society, incarceration almost always leads to bankruptcy, and a “felony” offense on your criminal record most often leads to a life of poverty.

The purpose of this column is not to argue the merits of the current system. Rather, it’s to imagine something different. 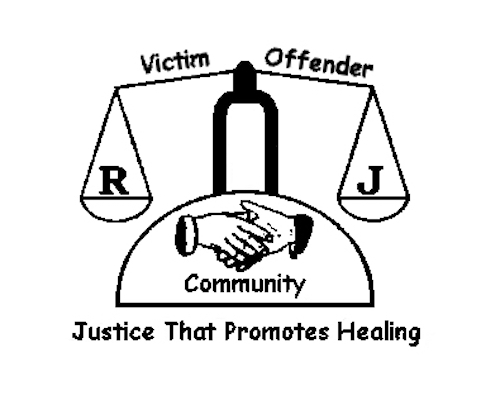 A Note about Restorative Justice

Restorative justice is an approach to justice that focuses on the needs of the victims and the offenders, as well as the surrounding community.

Crime is a larger issue than just how government deals with criminals. Since crime victims and the community bear the brunt of the crime, they too must be actively involved in the criminal justice process for a true change to occur.

Currently, many victims feel re-victimized by the criminal justice system itself because it excludes them from most of the process. Using a different approach, restorative justice victims take an active role in the process, while offenders are encouraged to take responsibility for their actions, “to repair the harm they’ve done—by apologizing, returning stolen money, or community service”.

Restorative justice asks that victim’s concerns be considered throughout the process. Victims need help regaining a sense of control over their lives, and they need to be compensated for their loss.

Rather than simply warehousing offenders, restorative justice system holds offenders personally accountable. They need to confront the pain they have caused to their victims and take the steps necessary to overcome their criminal behavior.

While restorative justice offers a positive step in the right direction, let’s take some of these ideas a few steps further.

Question: You find yourself on a jury, deciding the fate of some heinous criminal, such as Ted Bundy or Josef Mengele. You have the choice of either sentencing him to the electric chair or to total amnesia. Which would you decide?

Total amnesia involves wiping the brain clean and the people will have to start over from scratch, relearning how to walk, talk, and even how to feed themself all over again.

The question is a good one because it gets to the essence of what we value in human life. Do we value the life itself or the personality that exemplifies it?

I’ve asked this question of many groups, all of whom gave me different answers and different reasons for justifying their thoughts.

My favorite answer came from my son Kyler when he was 11 years old. After thinking about it for a while, he said, “I don’t think that amnesia thing is a good idea because people would still hate him and he wouldn’t know why.”

Envisioning a World Without Prisons

Let’s start with the simple question, “If prisons were removed as an option for working with criminals, how would we deal with them?”

In much the same way we considered different settings on a Star Trek phaser, how could we develop different ways of managing criminal offenders? As technology progresses, here are a few possibilities:

The advantage of most of these approaches is that the offenders can still remain productive members of society and the costs will be trivial compared to incarceration today.

Yes, technologies like these will lead to many abuses. But as we peel away the onionskins of transparency and add new layers of technology, our options for auto-monitoring, auto-correction, and automated forms of punishment will yield unusual new alternatives for righting the wrongs of deviant people in society.

This morning as I was scanning through headlines in the Denver Post, and came across: “Denver man, 85, with cane faces assault charge on security guard.”

Reading further down the article, the older gentleman became enraged after a security guard seized his handicapped-parking permit because it had expired.

Few cases, in my mind, are as worthy of hiring attorneys and spending time in a courtroom in front of a judge than this one. Of course I’m being facetious.

Incarceration is a system that breeds failure. People coming out are worse than when they go in.

At the same time, we live in a flawed world filled with flawed people. So some action needs to be taken.

I don’t believe it will ever be possible to find an actual “cure” for the excesses of human nature, nor should there be. But there is always room for improvement, and it’s very obvious that our current checks and balances are not adequately reining in the excesses of today’s bureaucracy.

For this reason, I’d love to hear your thoughts. Is the current effort with restorative justice enough, or is there something better?