Will there be Swarmbots in Your Future? 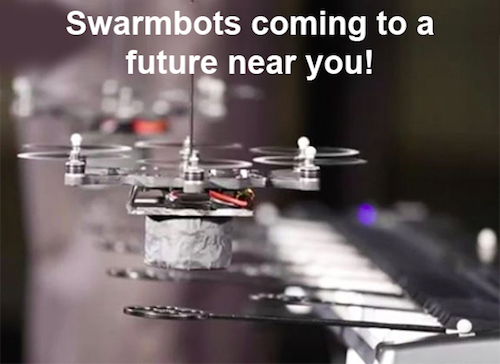 Imagine stepping out of the shower in the morning, and rather than reaching for a towel, a swarm of thousands of flying drones will surround you and begin to dry you off.

A few seconds after drying your skin, the same swarm will begin to attend to other morning prep duties such as shaving, applying makeup, drying and fixing your hair, adding lotions, deodorant, and powder where necessary, and completing everything in only a few seconds.

Once the face-prep is finished, the swarm will assemble itself as your clothing, rearranging itself into the color, style, and fashion most appropriate for your day’s activities.

The swarm will be in constant communication with you, anticipating your needs, responding to voice commands, replying when necessary through tiny ear-bots or projection eye-bots.

The swarm will handle many duties, simultaneously serving as body armor to protect you from injury, adjusting temperatures to keep you warm or cool, constantly communicating with the rest of the world-wide swarm network, attending to every bodily function, keeping you fit and trim in the process.

These same bots will also serve as your short-range transportation system. Much like a scene from a Superman comic book, the swarm will physically lift your body and fly you to where ever you want to go.

If this sounds like science fiction, it’s because this scenario just leapfrogged 10 generations of swarmbot development. At the same time, we are quickly moving into unchartered territory, and swarmbots like this will soon have capabilities we can’t even imagine.

Following natures lead, swarmbots operate much like a flock of birds, a school of fish, or a swarm of bees. Each animal knows what the others are doing and instinctively knows where they need to be at any given moment.

“Swarm robotics” is a term first coined by University of California Professors Gerardo Beni and Jing Wang in 1989 to describe the idea of swarm intelligence used to operate multi-cell robotic systems.

In swarm robotics, the thinking is that 200 metal heads are much better than one. In other words, a large number of simple robots can perform complex tasks in a more efficient way than a single machine.

The attributes or characteristics of swarm intelligence can be broken into three areas:

1. De-centralization means there is no command center or single leader for the group. It also means there’s no single failure point. The overall complexity of the system can be reduced to tiny, simple robots that operate together like a fluid, constantly reorganizing brain.

2. Self-organization. A self-organizing swarm is infused with “emergent intelligence” which gives it the ability to react. Each tiny robot in the swarm operates like cat whiskers, sensing any micro change in the surrounding environment and reacts accordingly.

3. Parallel Distribution. The parallel distribution of tasks, once again means there’s no single failure point in the system. Instead of a single highly intelligent robot, each member of the swarm can step in and take over if any other members fail.

In this type of system, each robot maintains a history of the activities performed by other robots based on observation, and independently performs a division of labor using this history. It then can modify its own behavior to adapt to each new situation.

Today’s State of the Art

Some of the early influences on swarmbot development occurred as a result of the Transformer Toy line produced by the Japanese company Takara beginning in 1984. These transformable toys led to more complex thinking about multi-cell robotic systems and later, swarms.

Since the early work in the 1980s, swarms have become far more sophisticated. From harvesting crops to monitoring the environment, from crawling through a rubbish dump looking for useful materials, to swimming through your veins delivering medicine, swarms are destined to become a growing part of everyday life.

While several teams have demonstrated ground-based drones working together, the first quadcopter swarm, flown as a synchronized flock, happened in March 2014. The Hungarian research team behind this effort demonstrated a grouping of ten autonomous robots leaving from an airfield outside Budapest, zipping through the open sky, flying in formation, and at times even following a single leader, all without any central control.

But even before this, the US military already had its first swarm squadron on order. In 2008, the US Army Research Laboratory awarded a $38 million contract to BAE Systems to develop a swarm of spy-bots to be used on reconnaissance missions. The project, known as MAST (Micro Autonomous Systems and Technology), is now underway and BAE hopes to unveil something soon.

Admittedly, we still have a long ways to go to create the future I’m envisioning. But it is through today’s crude capabilities that we can begin to envision an entire universe of swarmbot possibilities. 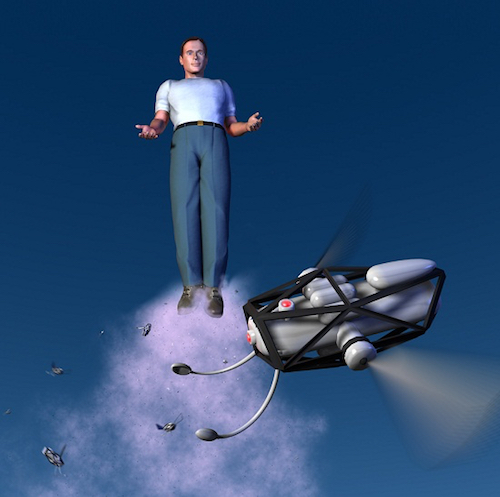 After watching a number of swarm videos, creative minds begin to imagine a vastly different world.

Having swarms cook our food, clean our homes, mow our lawns, wash our dishes and keep track of our children is just scratching the surface.

These same swarms will someday paint our homes, walk our dogs, scratch our itches, find lost objects, and unclutter our offices.

Acting simultaneously as our doctor, nurse, teacher, lawyer, banker, insurance and real estate brokers, they will intervene on our behalf, arbitrate difficult situations, provide us third party impartiality, and give us advance warning when something is about to go awry.

But even more than that, they will serve as our personal bodyguards, shielding us from severe weather, shading us from bright sunlight, silencing loud noises, amplifying whispers we wish to tap into, peeking around blind corners, and entertaining us when we’re bored.

They will leverage our capabilities, help us overcome our shortcomings, and keep us physically fit without strenuous workouts. For most of us, they will become our best friends, constantly encouraging us, a champion of our accomplishments, and a shield that will quickly rise for whatever kind of defense we may need.

It’s easy to conclude that once we have our own personal swarm, life will suddenly become easy. But that would be wrong.

The scenarios I‘ve described are perhaps 10 generations from now, maybe 2-4 decades away. There will be many baby steps of improvement between here and there.

Swarmbots will be the Internet of Things on steroids.

Each improvement will increase human capabilities, and those with more capabilities will simply be asked to do more.

Just as with all technology, there will be unintended consequences, and people with devious minds will figure out ways to use them for evil purposes.

Yes, on some level we will have bad swarms fighting good swarms, and swarm hackers plotting to corrupt even our most advanced technologies. But still, on balance, the forces of good will outweigh those with criminal intent.

As always, I remain optimistic about the amazing future unfolding before us. Personally I can’t wait to have my own personal swarm.

Naturally, painting images of a future technology like this is an inexact science and I’d love to hear your thoughts. So feel free to comment below on things I’ve missed, overstated, or gotten completely wrong.