Megaprojects: Four Bridge-Tunnel Projects that will Rewrite the Future of Humanity 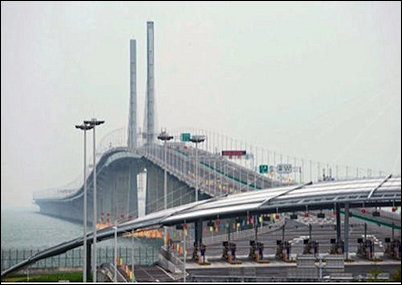 Opening day for the Hong Kong-Zhuhai-Macau bridge on October 23, 2018.

On October 24, 2018 the Hong Kong-Zhuhai-Macau Bridge was opened to the public. This 34-mile long bridge-tunnel system, consisting of a series of three cable-stayed bridges, an undersea tunnel, and four artificial islands is currently the longest open-sea crossing on earth.

Started in 2009, the Hong Kong Zhuhai Macao Bridge cost $18.8 billion and is designed to last 120 years. The bridge also comes with a few unusual hi-tech capabilities to monitor drivers:

This nine-year construction project not only raises the bar of human capabilities, it sets the stage for a series of even more challenging megaprojects that will both redefine humanity and the world as we know it.

Gone are the days where people were impressed by projects costing $50-$100 million. We are witnessing an explosion in the number of $1 billion+ projects with some, like the Qiddiya, Al-Ula, Neom, and the Red Sea Projects in Saudi Arabia, likely to exceed $1 trillion.

But the ones we hear about today are merely scratching the surface of tomorrow’s super megaprojects and the massive undertakings that will happen over the coming decades.

There are several important reasons why this is happening.

As people relocate from rural to urban communities and population clusters grow, so does the demand for major infrastructure improvements to help manage the traffic, water, sewage, power, and living strains of these growing economies. Leaders of megacities will be exercising their newfound clout in unusual ways.

Wages paid to workers building infrastructure projects will improve the local economy to a point where other megaprojects become viable.

More than ever, countries are competing with other countries to stand out. As global awareness improves, so does the desire to standout and impress the rest of the world. Megaprojects become a source of national pride and a status symbol for emerging economies.

Our growing worries of jobs being automated out of existence are causing elected officials to search for new jobs, and megaprojects will rise in priority as a potential source of work for the future unemployed.

Megaprojects have a way of collateralizing themselves through the sheer size and impact of the project. Even though many will be based on unprovable claims and flawed accounting, the spinoff economies alone will create an overpowering momentum to push them across the finish line.

In spite of their challenges, I’ve been focusing my attention on four major bridge-tunnel projects that will redefine humanity over the coming decades.

For many decades, infrastructure proponents have argued the relative advantage/disadvantages of tunnels and bridges or a combination of both.

While bridges look far more impressive than tunnels, they pose a number of challenges when it comes to ships passing underneath, weather-related issues, and ongoing maintenance and repair issues.

Tunnels tend to be more expensive to build and operate, but will experience far less deterioration over time. While a 1,000-year tunnel is conceivable, a 1,000-year bridge is not.

Highway vs. Railroad vs. Tube Transportation

One key decision point with each of these bridge-tunnel projects will be whether to design it strictly for cars and trucks, trains, or whether it should also include provisions for future forms of Hyperloop-style tube-transportation.

As an example, the Channel Tunnel between Great Britain and France is only designed to accommodate a passenger train between the two countries. This means no cars or trucks, no cargo, and no provision for a potentially much faster tube-train.

These will be critical decision points moving forward. Each project below will have radically different use cases and traffic demands, and no easy answers. 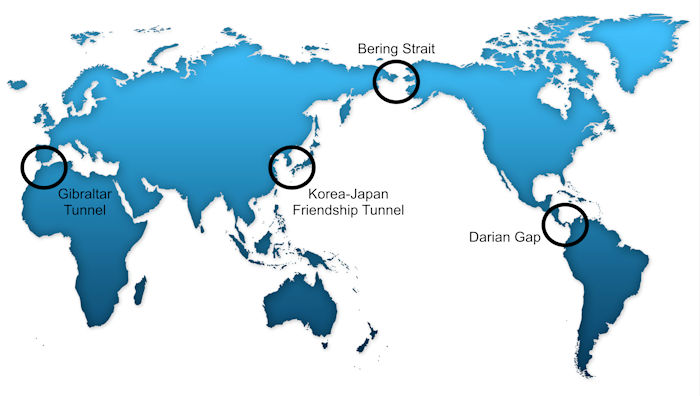 Four massive bridge-tunnel projects will cause the world to connect in ways never before imaginable.

Our capabilities are growing. Every technological advance is giving us new capabilities with the ability to accomplish many times what we could even ten years ago.

For this reason, super engineering feats like I’m describing here are within grasp.

Even though there are many more bridge-tunnel projects that will have a significant effect, in my opinion, these are the four that will have the greatest impact on people everywhere in the world. 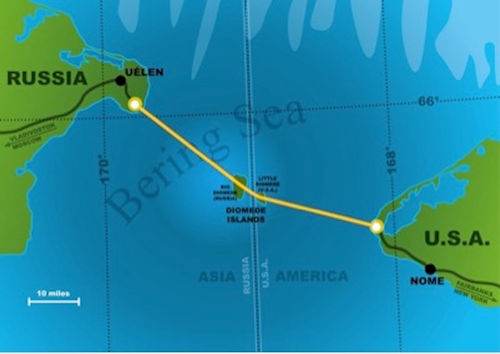 A bridge-tunnel across the Bering Strait is a challenging engineering fete in a cold unforgiving environment.

Building a bridge-tunnel system across the Bering Strait will effectively create a ground transportation link between North America and Asia. While there are a huge number of obstacles around designing, engineering, and paying for it, the benefits will also be enormous.

The most likely design will involve a bridge-tunnel system crossing the relatively shallow Bering Strait between the Chukotka Peninsula in Russia and the Seward Peninsula in Alaska.

History – The idea of crossing the Bering Strait was first envisioned in 1890 by William Gilpin, first governor of the Colorado Territory. He proposed a “Cosmopolitan Railway” that he imagined would link the entire world through a series of railways.

Two years later, Joseph Strauss, who went on to design over 400 bridges and was the lead Project Engineer on the Golden Gate Bridge, wrote his senior thesis about a Bering Strait railroad bridge. The project was presented to the government of the Russian Empire, but it was rejected.

In 1905, Russian Czar Nicholas II approved a railroad bridge-tunnel project, but everything fell apart with WWI and the Russian Revolution.

Several other proposals have arisen in recent years, and according to a report in the Beijing Times in May 2014, Chinese transportation experts were proposing to build a 6,213 mile-long high-speed rail line from Manchuria to the United States, a project that would include a tunnel under the Bering Strait and connect China and Russia to the United States and Canada.

Obstacles – The Russian side of the Strait, in particular, is severely lacking in infrastructure. No railroads exist for over 2,000 miles in any direction from the strait, and the closest unpaved road is 1,200 miles away. However, in 2008, Russian Prime Minister Vladimir Putin approved the plan to build a railroad to the Bering Strait area, as a part of a 2030 development plan.

On the American side, Alaska is a vast state that also has very few roads. It’s estimated another 750 miles of highway would need to be built. The closest city of any significance is Nome, which is about 100 miles away. Currently there is no ground transportation between Nome and the other cities in Alaska. Overall cost estimates range from $65-$100 billion. 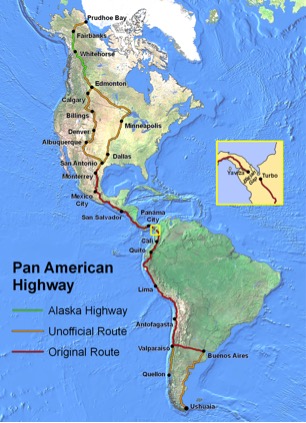 The Darien Gap represents the missing piece of the Pan-American Highway.

In 1937 the countries in North and South America signed the Convention on the Pan-American Highway, an agreement to build a highway system connecting all of its member countries. Over the next couple decades, an elaborate highway system was built throughout both continents except for a 60-mile stretch connecting Panama to Columbia. This has become known as the Darien Gap.

The Pan-American Highway now consists of over 19,000 miles of roads ranging from Prudhoe Bay in northern Alaska to Ushuaia, Argentina on the southern tip of South America, with only one short piece missing in the middle.

The Darien Gap begins in Yaviza, Panama and ends in Turbo, Colombia roughly 66 miles away. A number of alternate routes through the ocean that bypass the mountains and swamps are also possible.

Obstacles: The Darien Gap is an environmentally sensitive area filled with treacherous jungles, virtually impassable mountains, impenetrable swamps, and unfriendly wildlife including poisonous snakes, man-eating cats, crocodiles, caimans, biting ants, and venomous spiders. The worst of all are the clouds of mosquitoes carrying everything from malaria to dengue fever.

Many government officials are also concerned about opening a channel for drug traffickers between North and South America.

Several routes have been considered for the Japan-Korea bridge-tunnel.

The Japan–Korea Undersea Crossing is a proposed bridge-tunnel project to connect Japan with South Korea via an undersea tunnel passing over-under the Korea Strait using the islands of Iki and Tsushima.

The distance along this route is roughly 80 miles at its narrowest point, but the latest proposal is to construct 120-mile bridge-tunnel.

The first conversations about building this kind of infrastructure started in 1917, a little over 100 years ago. Since then a number of discussions have taken place with many high-ranking officials in both Japan and Korea expressing an interest in making it happen.

Obstacles: While each of these four bridge-tunnel project has its own challenges; this one is by far the longest distance. As new studies arise, cost and benefit projections raise a host of new arguments for and against the project. As some cost estimates now show it exceeding $90 billion, some doubt the wisdom of it ever paying for itself. 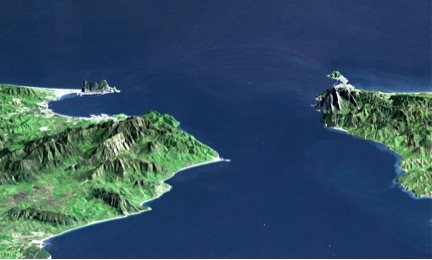 While the image shows what looks like an easy span to cross, the actual construction of a bridge-tunnel across the Strait of Gibraltar will require extremely sophisticated engineering.

The Strait of Gibraltar is the narrow waterway separating Europe from Africa, a distance of roughly 9 miles. However, a number of geological issues make crossing this short stretch of ocean a very complicated engineering, design, and physics challenge.

In 1979 the governments of Spain and Morocco appointed a joint committee to investigate the feasibility of linking the two continents that resulted in a much larger Euromed Transport project.

Over the years a number of tunneling projects have been proposed, and governments in both Africa and Europe would love to see it happen. But so far no one has come up with a complete plan for dealing with all of the extreme engineering challenges and the necessary funding.

Obstacles: As proposed, the tunnel would be 25 miles long, roughly 1,000 feet underground, and take 15 years to complete. Cost estimates range from $10-25 billion.

Each of these projects has been in discussions for decades, but what has changed is our exponential growth in capabilities.

While things like this seemed extreme in the past, each new technology breakthrough makes difficult projects of the past seem infinitely more doable today.

Countries themselves are being judged by their willingness to tackle super difficult megaprojects, and the scientific prowess they can bring to the table.

My prediction is that construction on each of these projects will begin within the next decade, and the interconnectedness of the entire world will radically change as a result of it.