Mini Airports: Coming to a city near you

As a futurist, I often get questions about flying cars. Well, the bad news is that we will never actually get to the flying car era that many have imagined, but flying drone taxis are similar and will prove to be far better. And the best part is they’re right around the corner. 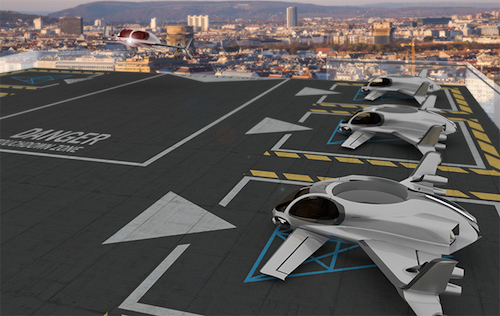 When flying drones started entering our consciousness a few years ago, a number of drone pioneers focused their attention on vehicles big enough to transport people.

Today, following the maiden voyage of the first Volocopter drone taxi flight September 2017 in Dubai, several companies have announced their intentions to compete in the soon-to-emerge drone taxi industry.

No one disagrees with the vast number of problems that will need to be solved before it becomes a staple of our transportation mix, yet the overwhelming allure of this prospect has attracted a growing number of our best and brightest seeking to make a name for themselves in an industry where the sky is literally the limit.

In just a few years air taxis will be common in most major cities and along with them will come a new kind of infrastructure – mini airports.

During the first stage of development, planners and entrepreneurs will carve out first-generation landing pads around cities. These will most likely be small sections of existing parking lots.

As traffic grows, and the number of landing and departures grows from tens to hundreds a day, single landing pads will grow into multiple pads with waiting areas.

Over time, crude landing areas will evolve into sophisticated terminals for managing passengers as well as the street-level and air traffic surrounding each of these mini airports.

The speed of this evolution will largely depend on pricing. With private planes still costing many times the cost of a first class ticket, it’s never broken into mainstream consciousness. If flying drones can somehow be lowered to 2-3 times an Uber drive across town, it will grow quickly.

Creating an entirely new industry like this requires a special breed of risk-taking entrepreneurs that know how to simultaneously raise money, design equipment, hire talent, deal with IP and legal matters, balance PR and publicity stunts, and tiptoe through a minefield of ten thousand decision points, where one wrong move could permanently torpedo their business.

Uber is also talking about being in the air taxi business, but they will not be developing their own equipment.

Even though Volocopter got tons of publicity in September 2017, the first one to actually start offering commercial flights was eHang who started offering a limited number of passenger flights starting in February 2018 with their 62 mph eight-rotor drone. Even though their ingenious design already comes with some level of autonomy and remote control flying ability, it still lacks many of the safety features like parachutes and airbags that will likely be required in the future. 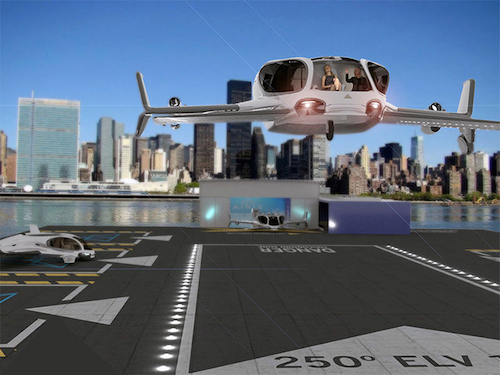 Logically, most passengers would prefer to have a drone that can pick them up in front of their home or business, but there are several reasons why this level of convenience will be a far later development.

Any drone large enough to haul people will be noisy and require routine refueling, battery charging-changing, and maintenance. This will mean that landing-takeoff locations have supporting ground crew to manage both the passengers and the equipment.

Since cities are very wary of any situation where potential fatalities could take place, a number of safety measures will need to be put into place. These will include fire and security procedures as well as having paramedics close by to deal with any emergencies.

Landing areas will need to be well planned, free of such things as trees, tall poles, power lines, animals, and children. Severe weather conditions such as high winds, hail, rain, and snow will force the closure of these mini airports until the situation improves.

To be sure, cities will want to add additional mini airports as demand grows and having multiple suburban locations will make them far more convenient. The big unknown will be the number of privately owned commuter drones and the need for private hangar space.

It is likely that one or more of these companies will design fly-drive drones capable of picking up a passenger and driving them to the nearest mini airport and flying them to their final destination. In this situation, we will likely see more privately owned vehicles. 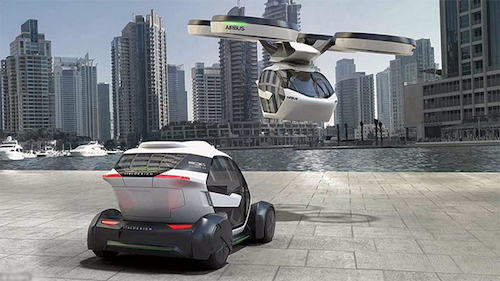 As with most breakthrough technologies, this one comes with a rich problem set that will have to be wrestled to the ground. Here are a few of the issues, but by no mean is this a complete list:

1. Noise – Electric drones will solve some of the engine noise problems, but the whirling blades still create enough sound to generate neighborhood complaints.

2. Safety – Operating without pilots, these drones will have to incorporate a number of rapid compensation algorithms to literally correct problems on the fly. Will we still have a need for parachutes and airbags or can overall reliability be boosted to the point of making them unnecessary?

3. Trust factor – Our relationship with machines inevitably starts with developing a level of comfort around safety and security. For many of us, our trust of flying drone taxis will stem from hearing our family and friends tell us about their experience.

4. Autonomy – Flying a drone is far too complicated for the average person on the street, so air taxis have to become fully automated and mind-numbingly simple.

5. Range, speed, and power – The first goal will be to design vehicles that can accommodate 90% of passenger needs. Convenience is the key, so price, range, and speed are all pieces of the complex equation for developing a minimum viable service offering.

6. Visual aesthetics – Tiny electric drones become invisible even at a short distance. But noisy, banner-pulling, exhaust-spewing, and disturbingly snoopy drones will force a number of laws to be written for governing the use of drones.

7. Wi-Fi everywhere – All autonomous vehicles, both cars and drones, need to talk to each other. Rapidly changing road and air conditions are critical variables. For this to happen, we will need a pervasive, reliable signaling system, with minimal latency, devoid of shadows and dropped signals.

8. Devious people – While most people will find the drone era refreshingly easy and convenient, there are always a sinister few who will find ways to use them for nefarious purposes.

Interestingly enough, the chief competition for drone taxis will be driverless technology. It’ll be a race to see which one develops fastest.

The driverless world will take 2-3 decades to unfold as the combined driver-driverless transition period will be rather messy. But each year of progress will step us closer to an increasingly fluid transportation system.

During this time, the air taxi industry will improve both in speed, range, and sophistication.

Since both require the creation of entirely new systems, we’ll first have to develop a regulatory environment to insure we have safe and reliable systems.

However, every regulation has both a compliance cost as well as operational cost associated with it. But a totally unregulated environment, where failures are unpredictable, can also be expensive.

This is yet another area that city’s are woefully unprepared for. They will need to come up the learning curve quickly.

I, for one, can’t wait for my first air taxi ride. That will likely happen within the next two years.