Recently, I was listening to a podcast from Marc Andreessen, who commented that there were no headquarters for the Roman Empire since people back then didn’t really have a need for offices.

I’m not sure that’s completely true. After all, the Romans did invent the business district, and there certainly needed to be a few offices in the palace for the white-collar workers of that era to keep records regarding trade, crop production, census, and other information.

What is certainly true, though, is that offices then as now, reflect, in radically different ways, how we work, communicate, and collaborate. Those factors have evolved over time and will continue to do so.

The Beginning and Middle Ages of Offices

Early offices seemed to be simply places of solitude in which to do solitary work – scribing, copying, accounting, and so on. We don’t get the sense that they were places of collaboration. They were shared worksites in locations that also housed records related to the kingdom and, later, commercial entities.

Eventually, those scribes and their peers did their work in locations meant primarily for information storage. It made sense to do the counting and ciphering in the location where that data, in the form of pages and scrolls, would be stored.

Then, as enterprises required more and more employees, these information storage-based offices also served as places of coordinated, overseen activity. As late as the mid-1900s, working in an office wasn’t so much for the sake of team building, planning, and problem-solving as it was for top-down communication, direction, and oversight.

With the advent of Cloud storage in the 1980s and 90s, the need for offices to serve as central information repositories became less compelling.

At the same time, influential business leaders like Peter Drucker were promoting the idea of employee empowerment and management delegation. These radical ideas ultimately led to less hierarchy within office environments, and offices began serving as ecosystems in which teams could collaborate and where innovation could be nurtured.

To accommodate this, at the turn of this century, office space began to look different, with increased shared space (including, unfortunately, cubicle farms) and open work environments, complete with the ubiquitous foosball tables, coffee bars, and bean bag chairs in rooms of solitude.

Video conferencing technology was actually developed in the mid-1900s (Bell’s Picturephone was demonstrated at the New York World’s Fair in 1964), but it was incredibly expensive and not terribly practical for widespread business use until the introduction of Skype and WhatsApp after the turn of the century.

Today’s popular video conferencing tools like Zoom and Microsoft Teams emerged just in time – a few years before the pandemic. 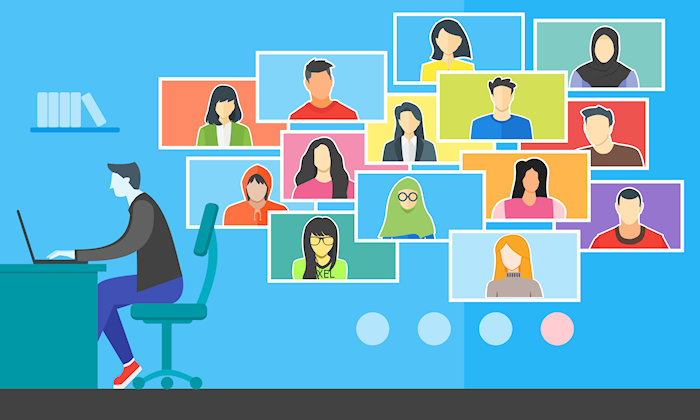 The Great Scatter and Work from Home

At the outset of the pandemic, offices went dark, and organizations took full advantage of these communication tools as their employees transitioned to working from home. Whereas previously, these technologies were used primarily for connecting multiple offices or people to offices, now they are used to connect teams of individuals without any office.

It’s interesting to consider that video conferencing has led to physical isolation and, in too many cases, reduced emotional investment in a team’s shared purpose instead of drawing people and offices together.

Today, the future of the office stands at a crossroads. Will it survive as a place for workers and teams to work in a home away from home, or will offices completely fade away, leaving companies to devise other methods for developing cohesion and collaboration?

The answer is: “neither” and “both.” It will vary by company and employee and reflect the relative clout of each at any point in time.

What’s clear, though, is that offices will look different than they do now, trends that may have been underway prior to the pandemic but were sent into hyperdrive in the past several years.

Nine Visions of the Next Version of the Office

Given the historical evolution of the office from an information repository to a collaborative space and the pandemic-driven enhancements in intra-office communication/collaboration technology, what lies ahead for the future of the office?

In the future, fewer employees will work full time from offices. But these spaces will always be a part of corporate life in general, even as they continue to evolve to meet the needs of company leaders and, increasingly, their employees.