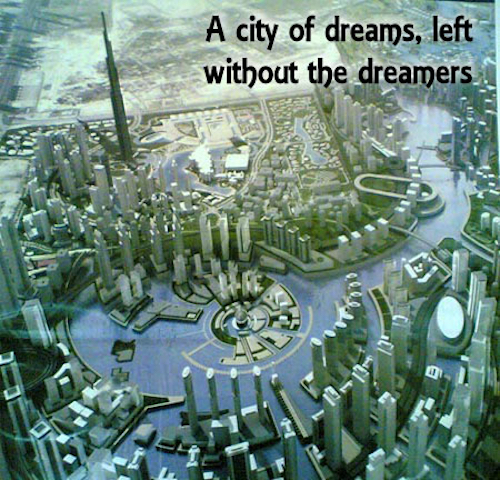 When policies and systems devastate innovation

What is happening is the over-extended are making a mass exodus of possibly Biblical proportions. The cause has a lot to do with the draconian Sharia, a code of Islamic law that has gained reputation among smugglers of tiny amounts of illicit contraband. Under Sharia, the punishment for defaulting on a debt is severe. Bouncing a check is punishable with jail time and debtor prisons are indeed alive and well.

Dirt collecting cars don’t tell the entire story. The root issues lie in the many dysfunctional elements of Dubai’s governmental systems where women are barred from executive positions, the lack of a standard addressing system making mail-to-the door delivery impossible, and a heavily censored web that keeps most online startup junkies at bay. These are but a few of this nation’s idiosyncrasies.

And Dubai is not alone. The economies of the region are crashing. For three decades, Abu Dhabi, Qatar, Bahrain, and other Gulf emirates experienced galloping economies. Like the shifting sands, an entirely new set of economic rules are bearing down, rules that stem from conditions outside their control. Massive oil money is not enough to stem the tide of shattered confidence.

So, fearful car owners are fleeing. Authorities have found keys inside. “Some had used-to-the-limit credit cards in the glove box. Others had notes of apology attached to the windscreen,” a story states in the Times.

Estimates are that property values will drop between 50 to 60 percent in 2009.

Globe & Mail’s Rami Khouri reported the 3,000 number may actually be grossly understated, and abandoned vehicles could have already eclipsed the 15,000 mark.

Known for their rigid rules, Middle Eastern nations face a reality that will be fashioned with a two-edged sword of law. Meant to discourage, the draconian laws have struck at the very heart of a precious resource. The self-inflicted penalty for Dubai may be a loss measured in quality, not quantity.

A short three months ago, I had the privilege of spending a week in Dubai and I witnessed a nation in decline. Loans were getting tougher to get, projects were being mothballed, and optimism was dwindling. As dire as things seemed, the months since then have proved to be worse as the once-powerful economy unraveled. Downward pressure of crippling debt loads stacked on more debt is pulling everything down to bedrock. Where that is is as much of a question there as it is elsewhere.

Alas, Dubai is a nation built on a financial house of cards. When the first signs occur that the emperor-has-no-clothes, purse strings are drawn tight and the downward spiral ensues.

Amid the despair is a forgotten group, a group most necessary for their recovery, but like many were caught off guard. Taken down with all the rest are a unique breed of people, people extolled during boom times, usually the life of the parties. These expatriates are an entrepreneurial sort, riding the highest highs and the lowest lows. These are the social malcontents who live on the edge, embrace chaos, and build their entire world around their dreams. But their entire world of dreams has suddenly careened off its axis. These are the people I call the risk takers.

Risk takers are a class unto themselves. Most possess uncommon intelligence. They are driven by passion, and tortured by their ideas. They are the heart and soul of the creative class.

Much like other social systems, risk takers are drawn to communities where creativity thrives. Just like art and musical communities, the world of the risk taker is creative in every aspect of their lives – including relationships, business ventures, and the way their finances are run.

What the risk takers hold most dear is freedom. Their greatest fear is losing the freedom they need to be creative.

On the other end of the social spectrum are people who run systems, the bureaucrats. To them, nothing is more beautiful than a well-disciplined community of people steering an obedient course through the maze of a rigidly structured Middle Eastern life.

In a down economy, power shifts from the creative class to the governing class. Lost assets, lost status, and lost freedom are now being reflected in the dust-covered paint of all those cars.

In Dubai, police have issued warrants for owners of the deserted cars. Stories of arrests of those who dared return spread quickly, and a massive brain drain has eviscerated the emirate. A once flourishing oasis of creativity is giving way to an ingenuity-desert as barren as the surrounding sands. The once fertile ideas are fading like a mirage.

Yes, they can still import talent and creativity, but imaginative people enjoy the company of other imaginative people. Much like the flowers that bloom and fade in the desert, building a creative class culture is very fragile.

I can only hope Dubai wakes up before it is too late.

← The Virtual Country Future Libraries: Nerve Center of the Community →