Pre-Testing Your Right to Vote 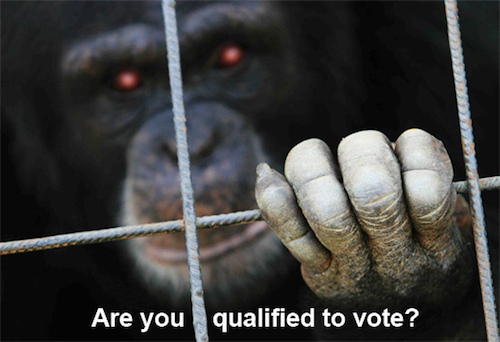 Every couple years, as the November election draws near, my wife Deb and I receive our ballots in the mail. Both of us spend considerable time studying the issues and candidates before making our final decisions. As with most couples, we don’t always agree.

Long before the ballots come, we have many discussions about these important topics and what effect they’ll have, not only on us, but also on our community as a whole. So we take our right to vote very seriously.

The section of the ballot that I find most frustrating is the section on Judges – Should these judges continue to serve in their current positions? We are given virtually no information about these people, and this severely compromises our ability to make an informed decision. Even doing online searches gives us very little to work with.

For this reason, I do not feel qualified to make this decision.

In the U.S., voting is a legal right granted to all law-abiding citizens over 18 years of age. Nowhere does it say that the voter has to be competent about the topic, or candidates, they are voting on.

This, however, could change, as voting software makes it as easy to test competency, as it does to vote.

Voting is the simple process of marking a series of boxes on a page. There are no right or wrong answers, just options.

Yes, your ballot can be disqualified for checking too many boxes, mutilating the ballot, or voting twice. But for the most part, it’s a very simple system that allows almost anyone to participate.

Yet, simple does not always mean better. What if there were a few questions that had to be answered correctly before the vote were accepted? What if each voter had to demonstrate some rudimentary knowledge of the topic in question?

Personally, I don’t think I should be allowed to vote on the judges that I had mentioned above. I’m simply not competent enough to make that decision.

As a citizen of a country, I would like decisions to be made by the best and brightest among us, not just anyone.

The reason why so few are interested in a more participative form of government, where people can vote on literally hundreds of issues throughout the year, is because the learning curve is too steep and it has the potential of attracting unqualified decision-makers.

So what if a few test questions were added to every ballot as a test of competency? For people wanting to study the issue, a short video could give some background information on the topic.

Would a more informed electorate mean better decisions? More importantly, would an open voting system that qualifies people through testing, give rise to new virtual communities that could rival the influence of national governments in the future?

e-Democracy and e-Government are terms used to describe the growing movement toward increasing citizen involvement in policy decisions through online systems. As we improve our systems for virtual involvement, giving people access to information on both sides of every issue, more people will take an interest in what’s happening in their own community.

Neither of these assumptions has been proven to be true. They indeed might be true, but so far they remain untested assumptions.

Nor has their been any serious studies of the many ways in which people can game the system for their own benefit.

That said, Internet technology is opening up many new ways in which people can participate on a local, regional, national, or even international basis. We are on the cusp of an age of experimentation for participatory governance. Invariably, these experiments will evolve into something far different than what most people think.

Many companies are currently working on online voting systems that are certifiably safe, secure, and tamper-proof. Some already claim they have achieved this goal.

Scenario 1: In 2018 the Norwegian Nobel Committee decides on using a different process for awarding the Nobel Peace Prize. After receiving roughly 250 nominations for the award, the committee narrows down the field to just eight names.

Working with a new certifiable form of election software, the Committee embarks on holding the world’s first global election to select the winner of the Nobel Peace Prize.

Allowing for a 60 day period for “campaigning” to occur, all votes are cast within a two-day period, with the winner announced the day after all of the votes are in.

During this time, a total of 750 million votes are cast with people from 84 different countries participating.

As a result of this process, the winner instantly becomes the most recognizable face on the planet…. more famous than Presidents, Kings, or any other global leader.

Also, as a consequence of this process, the Norwegian Nobel Committee is dramatically elevated in stature and influence, and the Peace Prize becomes the most coveted award on earth. The pursuit of peace becomes a global obsession.

Scenario 2: Not satisfied with the corrupting nature of present-day politics in countries around the world, a rogue group sets out to establish a new set of global standards for human rights.

The group starts out small but begins to build momentum with a series of well-targeted press articles. Over time, after holding a series of global elections to both define and refine ethical standards on basic human rights issues, the group begins to tackle more controversial topics such as abortion, infanticide, gay rights, military conduct, euthanasia, human cloning, and other end of life issues.

With each scheduled vote on controversial issues, the number of followers grows until there are several hundred million people weighing in on each issue.

Over time, the popularity of the organization, coupled with the overwhelming influence of their pronouncements, forces every level of government, in countries around the world, to rethink their existing laws and the systems they are using to enforce them.

Even though locally elected officials adamantly proclaim they are not about to be influenced by this group, thanks to the vast amount of news coverage they receive and the persuasive nature of their results, it becomes an issue that cannot be brushed aside.

Finding the Downside – Gaming the System

With the voting systems currently in place, the person who gets elected is the one who does the best job of appealing to the median intelligence of the voting public. This is probably a good thing, but tends to reduce political campaigns to simplified messaging framed around television sound bites.

With some of the very complicated issues we will be facing in the future, we will need a better system for drawing out better solutions.

Virtually every voting system can be manipulated, and I’m sure the one I described will be no exception.

Even with these potential pitfalls, there is a potential for something far better than what we have today.

If we consider the world one hundred years in the future, what will be the most powerful entity on the planet? Will it still be a powerful nation like the U.S. or will some other organization emerge?

Perhaps it will be a religious organization, a large industrial association, a grouping of countries like the EU, or some other global governing body like ICAAN or the United Nations.

While questions like this are difficult to answer, one prediction that is easy to make is that the antiquated voting systems being used today will not last much longer. And new voting systems will create new options that few of us have previously considered.

In the future we may indeed have the right to vote on such issues as the:

But will we be able to vote on the issues that really matter? Over the coming years we may be asked to weigh-in on a variety of major global topics.

Yes, these types of elections pose a substantial threat to our current balance of power. While some people will dismiss them as unrealistic, others will view them as an undermining force. They may be both.

People who will decide are the ones who architect the systems, and there will be no voting on that issue.