The Next Giant Solar Flare is Unavoidable! Will it Bomb Us Back Into the Stone Ages? 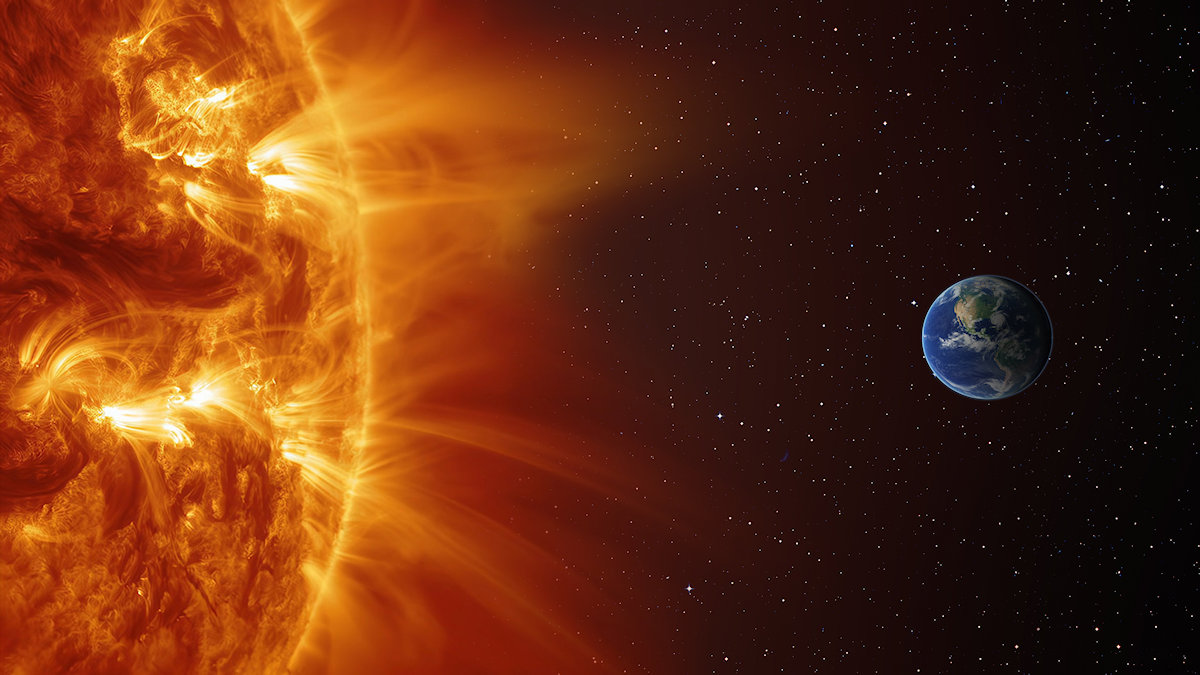 One night, a little more than a thousand years ago, Native Americans in North America were startled to see stars fade away as darkness into a dusky daytime long before morning. They weren’t sure what it foretold or what to make of it, but they prepared for the worst, even as they marveled at the accompanying auroral display.

The show was visible the following night as well, but the skies were far less bright. Soon all was back to normal. These American Indians were left with memories of this seemingly spiritual occurrence, but there were no other signs that anything in their world had changed.

As we now know, this was a solar flare and coronal massive ejection (CME) event, complements of the Sun. The only impact was on the senses since these manifestations don’t affect biological organisms.

Fast forward about 800 years to September 2, 1859, when a similar event was observed in the skies. Eighteen hours before this solar flare-CME light show began, though, astronomer Richard Carrington was working in the Town of Redhill, 35 kilometers south of London. Carrington was tracking a sunspot when he observed a “white hot flare” on the Sun’s surface that lasted for several minutes.

He was observing the birth of another CME destined for planet Earth. But when this CME reached the lower levels of Earth’s atmosphere, the impact of the resulting geomagnetic storm was a bit more serious than the event 800 years earlier.

The 1859 CME wasn’t necessarily more powerful than the earlier one, but there was one major difference. The Earth had changed in the interim. Humankind had discovered and harnessed electricity. We had electric motors, circuitry and telegraphs and the CME’s magnetic field disrupted the magnetic fields of these electric circuits.

But still, the impact of the CME event wasn’t catastrophic. The most remarkable aspects were more curiosities than a problem. Some telegraph operators received shocks and minor burns. Their devices momentarily seemed to be self-powered, with some reportedly continuing to run and transmit even after they were hastily disconnected.

Overall, though, citizens of the world once again marveled at the oddly-lit night and the incredible auroral displays usually only seen near the north and south poles. Another CME episode came and went in the history books with little damage done.

Next time, however, we may not be so lucky.

While many people fret about “solar flares,” the real danger is from CMEs. Both are triggered by eruptions on the sun. They may occur simultaneously – a CME often accompanies a solar flare, and a CME won’t happen in the absence of a solar flare. The stronger the solar flare, the more likely it is that it will be accompanied by a CME.

The emissions of the two are quite different. In the case of solar flares, the sun simply emits radiation – light that reaches the Earth’s atmosphere at the speed of light in about eight minutes.

But when the upheaval on the Sun’s surface is more intense, solar matter in the form of charged energy particles is also ejected into space. If the CME happens to be propelled precisely in the right direction to collide with the moving Earth, the plasma cloud will reach deeper into Earth’s atmosphere than the light energy of a solar flare … and with far more destructive results.

NASA helpfully describes the difference between these two phenomena by comparing the situation on the Sun with firing a cannon. When a cannon is fired, the muzzle flash can be seen far and wide. That’s analogous to a solar flare with the light traveling at the speed of light. This is followed by the expulsion of the cannonball itself, which has a far more targeted and localized affect. And as with CMES, the impact of the cannonball happens at a far slower rate than the speed of light.

Don’t take the analogy too far, though. The CME doesn’t make a physical impact on the face of the Earth. The plasma, the concentrated cloud of charged ions, makes its way into our atmosphere and interrupts and interferes with other magnetized electrical charges.

The CME plasma that arrived a thousand years ago didn’t encounter any electrical devices so it simply reacted with the oxygen and nitrogen in our atmosphere to create dim light and extensive aurora displays before it dissipated with no harm.

CMEs occur in the context of the Sun’s 11-year solar cycle when its activity peaks and declines. We’re near a peak in the next year or so. During this brief period, the sun’s magnetic field lines are especially chaotic, with the rapid acceleration of charged particles that can be ejected as solar flares and CMEs.

Direct-hit CME events like the ones in 1000 CE and 1859 are the culmination of a series of worst-case scenarios.

When a CME contains atoms, electrons, and ions with sufficient energy … and the ejection is pointed precisely so that it will impact Earth (itself a moving target in orbit) … and the magnetic fields of the CME and Earth are “anti-aligned,” the occurrence will indeed spell trouble – more than just night lights and auroral light shows. But we’ll get to that in a minute.

In most cases, though, the CMEs emitted by the Sun have relatively low energy, they’re off target, and/or they’re deflected by Earth’s magnetic shield.

The National Oceanic and Atmospheric Administration has estimated that a CME “Carrington Event” could be expected to impact the Earth approximately once every 500 years or less.

We reportedly dodged a bullet in July 2012 when a powerful CME ejected in our direction, passing through a point in space just nine days away from where we were orbiting at 30 kilometers per second.

Knocking out Power Stations and Grids

In the years since 1859, our electrical infrastructure has become widespread and interconnected. If a CME’s massive geomagnetic-induced surge of current encounters any of the infrastructure of our electric grid system, we’ll see explosions, fires, and blackouts at our power stations and substations that could leave major areas without electricity. Extend that impact to multistate regions or even worldwide, and the results could be unimaginable. But we had better imagine them because “once every 500 years” can’t be ignored.

As if losing all electricity wasn’t enough of a disaster, CMEs and significant solar flares can disrupt important communications systems.

GPS systems rely on a stable ionosphere for radio transmissions. CME disturbances can send these measurements off-kilter by dozens of feet, with disastrous consequences for some sensitive systems.

But then again, Earth-orbit satellites are easily damaged by energy bombardment from significant solar flares and CMEs. Communications satellites in upper geosynchronous orbit are especially vulnerable.

Without electricity for an extended period of time, our lifestyle as we know it would be completely disrupted and we’d become immersed in the literal and figurative dark ages.

Backup generators would run out of fuel in a matter of hours or days. After that, to put it mildly, the Internet would be “down.” And since more and more of our financial, healthcare, communication, utilities, and transportation systems rely on the Internet and Internet-empowered blockchain, these systems would go down as well.

What was daily life like in 1830? We’d all better read up on it because we may need to live in that world for weeks at a time. Many won’t survive it, unfortunately, and succumb to floods, cold, heat, illness, lawlessness, crashes, and hunger.

What Can We do to Prevent a Future CME Disaster?

We can’t prevent a one-in-500-years, Earth-impacting CME, but we can and must make some adjustments to our systems in order to limit or prevent the kinds of worst-case scenarios described above.

We’re already making progress in some important areas … but much more can be done.

Fortunately, CMEs don’t travel at the speed of light; they take anywhere from 15 hours to several days to reach Earth. We’ll have time to see them coming if we have appropriate Earth- and space-based detection systems in place so we can take protective measures. We need to continue to develop our early warning systems like that at the National Science Foundation’s Daniel K. Inouye Solar Telescope on Maui. Earlier warnings about possible CMEs give power plant operators an opportunity to appropriately prepare for a likely surge and give satellite operators time to put their satellites into safe modes.

As basic as it may sound, electric grid infrastructure can be protected from CMEs if they’re properly grounded using copper or other conductive materials that send the surges safely into the ground. We need to ensure that every power plant, substation, and other critical pieces of power grid infrastructure is protected in this way.

If we don’t take these actions, a major CME event might not destroy the Earth, but in just a few hours, it could bomb us back into the pre-technology stone ages.