Piercing the Field of Knowability 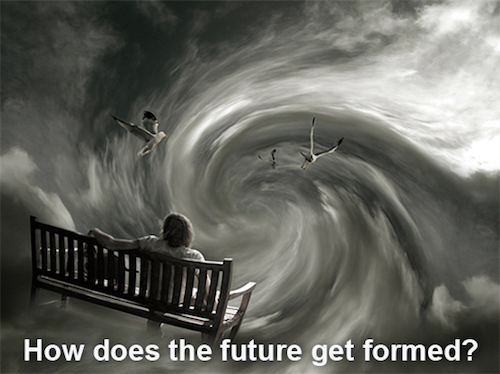 As a futurist, I’ve always been interested in our relationship with the future. But lately I’ve become obsessed with understanding more about the dividing line between the present and the future.

When thinking about this topic it’s easy to slip in thoughts about premonitions, ESP, and similar unexplained phenomena. But that’s not what this is about. Instead, I’m searching for a hard-science approach to the unveiling of the present.

Over the past year I’ve been developing a theory about what I call the “Field of Knowability.” Parts of this were described in a column I wrote on the “12 Laws of the Future.”

My theory begins with the assumption that there is a small gap in time between when the future is formed, and when we know about it. The point when we become “aware of the present” is what I refer to as the field of knowability.

This means that the “present” would exist for a tiny period of time, perhaps just a fraction of a second, before we ultimately experience it. Think of it as a staging area for what occurs next.

Here’s why I think this is important.

The concept of time is a human construct that works well enough for us to measure duration of events and intervals between them. Time has long been a major subject of study in religion, science, and philosophy. But all theories of time are riddled with unanswerable questions and eventually break down.

Some simple, relatively uncontroversial definitions of time include “time is what clocks measure” and “time is what keeps everything from happening at once.”

Two contrasting viewpoints on time come from Isaac Newton and Immanuel Kant. Newton’s view was that time is part of the fundamental structure of the universe—a dimension independent of events, in which events occur in sequence. This explanation has become known as Newtonian time. Kant believed that time was neither an event nor a thing, and therefore not measurable nor travelable.

Putting those definitions aside, time remains one of the seven fundamental physical quantities in the International System of Units used to define our world.

Separating the Present from the Future

Einstein described it this way. “The distinction between the past, present and future is only a stubbornly persistent illusion.”

But where does the present come from? How does it get formed? Who decides what form it takes?

The movement or progression we experience from one moment of time to the next is driven by what I call inertia.

Using that basis of understanding, is it possible to know something-anything about the present before it happens?

We’ve all experienced situations where we know someone is calling us before the phone rings, or that someone we’ve been thinking about is standing at the door before there is a knock on the door.

Is it possible that humans have sensory perceptions that feed us information about the “pre-present” with quiet signals directed through our subconscious? Would this be something like seeing lightning long before we hear it?

What Happens to the Present When it’s over?

After we experience the present, we are done with it. It’s over. So then what?

What is the duration of the “present?” Some of our more recent movies have been filmed at 48 frames per second. Do we experience the present at a rate of 48 “presents” per second, or is it faster than that?

What happens to the present when we have finished with it? Does it simply get discarded?

Is there some cosmic junkyard in another dimension where all of our “used” experiences go? A wasteland of former “presents?”

Every existing “present” is becoming displaced by the next “present.”

Since two “presents” cannot coexist, one volunteers to become the past? How does that work?

Does the past permanently disappear or is there still some record of it?

Reality is constantly unfolding, but is it possible that there is some sort of time-delay between when it is formed and when our human senses are able to comprehend it. If so, many of today’s mysteries of science and physics could be explained.

As an example, the nature of gravity has been one of mankind’s greatest unsolved mysteries. So what if the forces of gravity were exerted in this ultra-brief period of time, prior to knowability, with the only thing remaining, once the present arrived, being the effects of gravity, not the measurable force itself.

So how can we create an experiment to test this hypothesis?

The first test needs to prove the existence of a “present” before we know about it, even if it’s only a fraction of a second before human knowability sets in.

The second test would be one to pierce the field so we can “know before we know.” How do we time-shift the present into the pre-present?

Yes, I realize you may consider this to be the delusional thinking of a madman.

But as we amp up our microscope in viewing how every moment of the present is transacted, how we shed these fleeting occurrences of the here and now, and take our next micro-step into the future, we begin to see far more questions than answers.

I will end with one more of Einstein’s thoughts, “The most beautiful thing we can experience is the mysterious. It is the source of all true art and science.”

I think this one qualifies as beautifully mysterious.

That said, I’d love to hear your thoughts. Have I sincerely gone off the deep end this time, or is this something that deserves further study?

Thank you for listening.