The Future of Asteroid Mining

Never say never. That’s one principle of futurism that proves itself time and time again.

Driverless vehicles. Citizen travel in space. Robots. Global currencies. Alternate universes. Mars exploration. At some point in history, each seemed like a pipe dream, if not bizarre … until really smart people methodically made the necessary breakthroughs to make them a reality.

We’re also making incremental progress in many other areas so that they don’t seem as far-fetched as they did even a decade ago. Manned missions to Mars. Electrified interstate highways. Colonization of the Moon. We’ll ultimately put these into the “Win” column, too. Each one is progressing on its own terms and its own time frame – moving inexorably toward the day that it’s front-page news and then quickly a normal way of life. Smart and creative people are steadily working to pull “outside the box” ideas closer to the box borders.

Add another moonshot to this list of ultimate breakthroughs: asteroid mining. We have a long way to go, but it will happen.

Why mine asteroids? In the words of Depression-era bank robber Willie Sutton, “Because that’s where the money is.” And according to NASA, “the money” equates to $100 million for every person on Earth in the form of gold, iridium, silver, osmium, palladium, platinum, nickel, aluminum, and other materials.

Asteroids are the “leftovers” from the formation of our solar system and its planets, so they can be expected to have many of the same components. The majority are in the asteroid belt found in orbit around the sun between Mars and Jupiter.

One sure sign that asteroid mining has shifted from science fiction to serious business when companies are being formed around the processes and governments are looking at regulating how to authorize ownership of these interplanetary resources. U.S. government policies seem to consider asteroid resources to be fair game to whoever can exploit them, much like ocean resources that lie outside the coastal boundaries of any country.

It’s estimated that there are 150 million asteroids in our close-in solar system but not all are of the metallic type that would be especially rich in these minerals and ores, either to transport back to Earth or to be used in space construction.

Some of the ones with the most potential could nearly pay for the entire industry investment. The 16 Psyche asteroid discovered in 1852 has an approximate diameter of 140 miles – and an estimated $700 quintillion (one quintillion is equal to one million trillions) in iron, nickel, gold, and other ores. NASA is planning a fly-by to check it out in more detail.

At this point, 16 Psyche may be an outlier, but many other asteroids have been identified containing similar element deposits valued in the easier-to-digest billions of dollars. 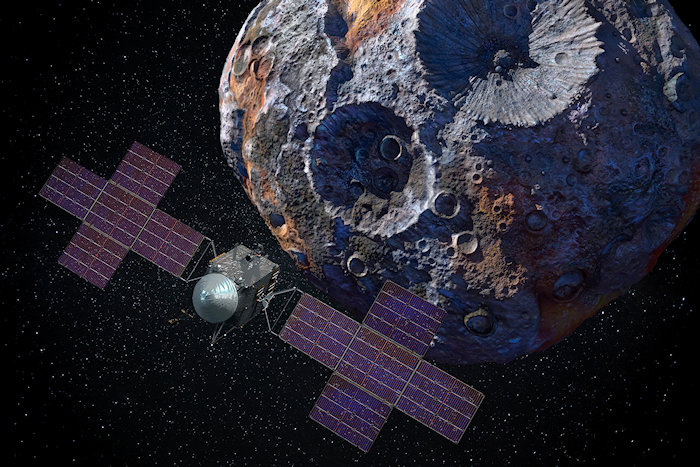 We May Not Have a Choice

Asteroid mining would be incredibly expensive, but at some point, the cost of obtaining these rapidly depleting materials on Earth will be greater than the recovery costs related to space mining. That’s when asteroid mining will shift from a theory to a necessity if we want to maintain our way of life.

This kind of earth-based depletions are a real possibility according to this analysis from the World Economic Forum. Interestingly, the article from just four years ago doesn’t mention asteroid mining as a solution – it focuses on other types of breakthroughs like synthesizing the declining elements, developing alternative technologies that don’t rely on those elements, and recycling efforts. Also, when pointing out the environmental damage and social impacts of mining these items on Earth (especially from gold mining), it doesn’t mention that these would be mitigated with space mining.

Forget the image of astronauts wielding pickaxes. We will see mining machine space vehicles drop down on the surface of asteroids that have been identified as likely sources. They’ll drill, scoop, and collect material. In fact, this basic mining technology has been proven. Both the U.S. and Japan have landed probes onto asteroids, collected surface material, and departed again.

On major source asteroids, robots will do the dirty work and load these transports, sitting idle between transports. The transports will deliver the mined or intact material to moon-based or other mid and low-orbit automated processing plants where the materials will be refined. The purified elements will be shipped to Earth or used in space construction. The byproducts will be compacted into small asteroids using a safe binding agent and then delivered back to deep space in a precise location.

In subsequent generations of the technology, some level of refining or smelting will even happen on the surface of major, high-yield asteroids. And while it sounds a bit concerning, we’ll also use evolving technology to steer asteroids closer to earth orbit where mining and materials transport is more efficient.

Sounds simple, right? No, of course not. Scaling this landing-retrieving-returning-processing into major levels of production seems pretty impossible. But that’s because we’re looking at asteroid mining through the eyes of practicality, based on what’s possible today. But as we mentioned above, breakthroughs are really the sum of solutions to incremental challenges.

And numbers like “quintillions” are powerful motivators, as is the competition to be the first trillionaire!