Driverless Highways: Creating Cars that Talk to the Roads 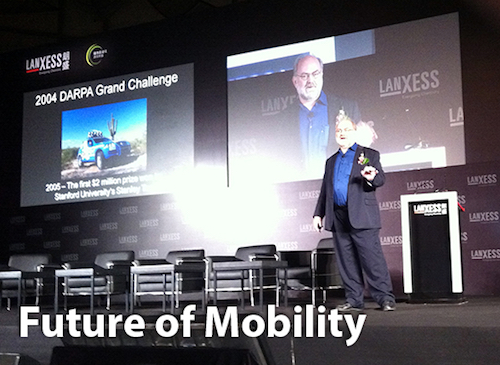 Yesterday I had the privilege of speaking at a conference on the “Future of Mobility” in Shanghai, China. The event was produced by the very forward thinking people at Lanxess, a German-based chemical company that broke ground the day before on a new facility to expand its already significant base of operation in Shanghai.

As the world’s leading producer of synthetic rubber for the automotive industry, Lanxess is very interested in positioning itself at the forefront of our mobile future. One of the biggest trends for this industry is the push to make vehicles driverless.

While most people have been focusing on the driverless technology inside the vehicle itself, where noteworthy accomplishments seen to be happening on a daily basis, the shift will also cause huge changes to occur in area’s like insurance, public policy, parking, delivery services, and especially highway engineering.

Even though the art of road building has been continually improving since the Roman Empire first decided to make roads a permanent part of their infrastructure, highways today remain as little more than dumb surfaces with virtually no data flowing between the vehicles and the road itself. That is about to change, and here’s why.

The number of cars in the U.S. works out to 800 for every thousand people. In Japan, that number is 600 per thousand and South Korea, slightly under 400. But in Shanghai, the car per person ratio currently stands at 169 cars per 1,000.

While the people of China own a smaller percentage of vehicles than other countries, their wealth is increasing rapidly and more cars will soon add additional layers of complication to their already crowded streets.

But the Chinese government is acutely aware of this problem. Restrictions are already in place to limit the number of vehicles that can be licensed inside some of the larger cities like Shanghai and Beijing.

So where does that leave people who wish to become part of this emerging mobile lifestyle? Going driverless may hold some exciting new options.

Driverless technology will initially require a driver, and it will creep into everyday use much as airbags did. First as an expensive option for luxury cars, but eventually it will become a safety feature required by governments.

The greatest benefits of this kind of automation won’t be realized until the driver’s hands are off the wheel. With over 2 million people involved in car accidents every year in the U.S., it won’t take long for legislators to be convinced that driverless cars are a safer option.

Many aspects of driverless cars are overwhelmingly positive, such as saving lives and giving additional years of mobility to the aging senior population. However, it will also be a very disruptive technology.

If done correctly, driverless vehicles may even deal a fatal blow to the auto insurance industry. 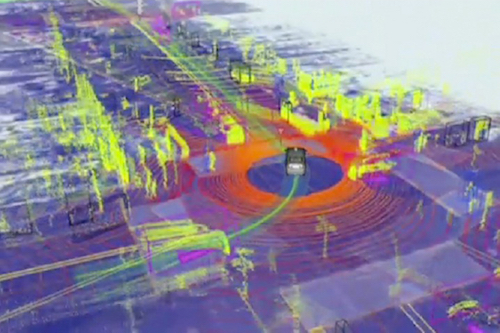 Image of what a driverless car “sees”

Creating Cars that Talk to the Roads

As cars become equipped with driverless technology, important things begin to happen. To compensate for the loss of a driver, vehicles will need to become more aware of their surroundings.

Working with cameras and other sensors, an onboard computer will log information over 10 times per second from short-range transmitters on surrounding road conditions, including where other cars are and what they are doing. This constant flow of data will give the vehicle a rudimentary sense of awareness.

With this continuous flow of sensory information, vehicles will begin to form a symbiotic relationship of sorts with its environment, a relationship that is far different than the current human to road relationship, which is largely emotion-based.

For this reason, it would be foolish of highway engineers to ignore the opportunity to build roads as intelligent as the vehicles that drive on them.

An intelligent car coupled with an intelligent road is a powerful force. Together they will accelerate our mobility as a society, and do it in a stellar fashion.

In the driverless era, intelligent highways will be able to accommodate 10-20 times as many vehicles as they do today. Counter to traditional thinking about vehicle safety, the higher the speeds, the fewer the number of vehicle on the roads at any given moment.

As we compress the time and space requirements of every vehicle, we will be able to achieve a far higher yield of passenger benefits per square foot of road resources.

Rather than waiting until a road becomes a serious hazard, as is currently the case, and repair crews disrupt traffic for hours, days, or longer, micro repairs can happen on a daily, sometimes hourly, basis. High-speed coatings and surface repairs can even be developed for in-traffic application.

Even treacherous snow and ice conditions will have little effect if deicer is applied immediately and traffic is relentless enough.

In the same way people hail a cab, people in the future will use their mobile devices to summon a driverless vehicle whenever they need to travel. Without the cost of drivers, this type of transportation will be infinitely more affordable, for most, less than the cost of vehicle ownership.

So rather than buying a car, and taking on all the liabilities of maintenance, upkeep, and insurance, consumers will simply purchase transportation whenever they need it.

As the transition is made to driverless vehicles, the number of vehicles sold to individuals will begin to decline, and a growing percentage will be to large fleet operators offering the new “transportation on-demand” service.

In response to declining car sales, the automotive industry will adopt a “selling transportation” model where, rather than “selling” cars to fleet operators, car companies will begin charging a nominal per-mile charge.

Fleet operators will love the arrangement because there will be no large up-front purchase price, but instead, only a small monthly fee based on the number of miles driven.

As the sale of cars begins to decline, the automobile industry will start to design and manufacture cars capable of driving over 1 million miles. By collecting a small per-mile fee over the life of a million-mile car, automobile manufacturers will have the potential of earning ten times as much, per vehicle, as they do today.

This will mean all car parts and components will need to be designed more durable, longer-lasting than ever before. Both quality and design standards will be pushed to new levels. 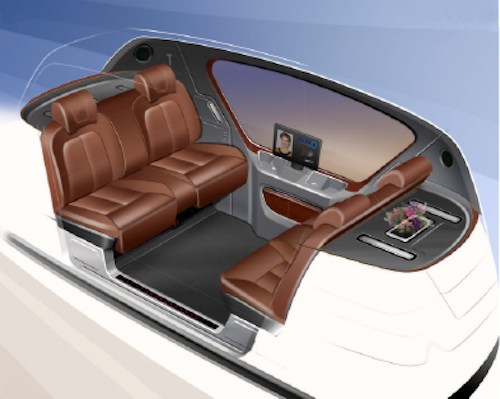 Focus on the “rider”

Car designers today spend the vast majority of their time trying to optimize the driver experience. After all, the driver is the most important part of the ownership equation. But that will soon change.

In the “driverless era,” the focus will shift to passenger comfort and passenger experience. Fancy dashboards displaying dazzling amounts of information will become a thing of the past as riders obsess more over the on-board movie, music, and massage interfaces.

Some cars operations will be more conversational in nature, pairing socially compatible riders in a way to maximize the conversational benefits of like-minded individuals. Others will stress the benefits of alone-time, offering a peaceful zen-like experience for those wishing to escape the hustle and bustle of work-life.

They already understand time compression, using high-speed rail systems to reduce the travel time on the Beijing–Tianjin Intercity Railway from 70 to 30 minutes.

Similarly, the Beijing-Shanghai High-Speed Railway that opened in June 2011 reduced the 819 mile distance between the two largest cities in China to under 5 hours.

With the coming turnover in infrastructure, more in the next 20 years than in all human history, countries that can make decisions fastest, and perform quickest, will have a huge advantage.

China has demonstrated time and again that they can make things happen quickly.

We are all terminally human, and human fallibility lies at the heart of the transportation conundrum. We all love to drive, but humans are the inconsistent variable in this demanding area of responsibility. Driving requires constant vigilance, constant alertness, and constant involvement.

However, once we take the driver out of the equation we solve far more problems than the wasted time and energy needed to pilot the vehicle.

But vehicle design is only part of the equation. Without reimagining the way we design and maintain highways, driverless cars will only achieve a fraction of their true potential.

Combining smart cars (driverless) with smart highways (also driverless), we can begin to envision a far brighter future ahead.

In the end, we will be driving towards a far safer and more resilient society, but we still have a few bumpy roads to go down in the mean time.