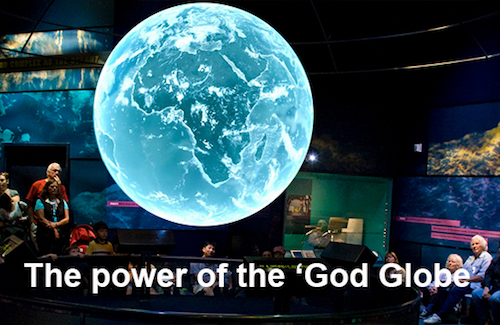 In 1998, a column I wrote for The Futurist Magazine took issue with the state of computer displays. Viewing the vast and growing Internet through a little square box on our desk was, in my opinion, the equivalent of watching a baseball game through a knothole.

As a solution, I proposed we experiment with a variety of different shapes for displays starting with my favorite, a spherical display, well suited for viewing global activities ranging from travel itineraries, to animal migrations, to pollution flows, to weather patterns.

Even today, fifteen years later, we still find ourselves viewing the online world with primitive 2-dimensional flat displays. So when I heard about one satellite company’s vision for developing a real-time globe, with up to the minute live video feeds of virtually every square inch on earth, naturally it caught my attention.

It wasn’t just the spherical displays or video feeds of the earth that peaked my imagination, but the overall convergence of data. The number of sensory devices monitoring the earth is about to explode, and it occurred to me that a cross-pollination of data flows will radically alter our way of life.

Our growing number of data-generating devices will vividly increase awareness of the world around us. Increased awareness improves our ability to predict, and superior predictability will lead to greater control. Super awareness gives us the ability to pinpoint critical inflection points, and make changes before something serious happens.

But to do this, we will need a master command center strategically positioned at heart of this data streaming activity. As a way to visually imagine what this will look like, think of all global data streaming through one master console with a giant spherical display used to monitor it.

Yes, it will very likely unfold in a far different fashion than this, but I’d like to take you along on a journey into a scenario I call the “God Globe,” where we form a master command center for planet earth, and for the first time ever, begin to control nature’s greatest forces.

The Network Effect of Information

Crossing the streams is bad. We all learned this lesson in the movie Ghostbusters, but then they proceeded to do it anyway.

Most of the tech world has been defined by what has been called the “network effect,” a combined tech-social-business phenomenon defined by exponentially greater levels of value and influence associated with the number of people in a given network.

Companies like Apple, Facebook, Microsoft, eBay, and PayPal, have each soared to multi-billion-dollar valuations by leveraging the power of the network effect.

But what happens when data streams begin to cross-pollinate with other data streams. As an example, when video feeds from satellites get overlaid with sensor data on the ground, the resulting information suddenly contains exponentially greater value.

Each layer of information that gets added to the mix will give us far more ways of understanding how the world functions, extracting details, and even spotting the tiniest point of when and where something has changed.

In Search of Anomaly Zero

Anomaly Zero is a term I use for the theoretical earliest possible point where problems can be detected.

Whenever an anomaly occurs, it becomes an inflection point for change. If problems can be detected early enough, stopping them or altering their direction is easy.

For example, when a forest fire first begins, it’s relatively easy to put out the flames when it only covers a few square feet. Once it grows in size to several acres, typically the point where we spot it today, it becomes far more difficult to contain.

This applies to both human-based problems as well as the ones created by the forces of nature. So when relationships between counties or organizations begins to sour, red flags will instantly alert those monitoring the God Globe.

Once we have the ability to detect “anomaly zero,” we suddenly have the power to stop major catastrophes like wars, hurricanes, tornadoes, and major uprisings long before they get out of control and grow to full intensity.

Real-time data feeds can be quite valuable if the information is accurate, dependable, and significant. But it becomes even more valuable when it’s combined with other feeds.

Data feeds today are hard to track down, and for the provider, hard to monetize. Every deal that’s cut is a one-off arrangement with wildly different terms and pricing schemes.

Sometime over the next few years, an enterprising entrepreneur will devise a service for both gathering and selling data feeds, with payment splits structured to compensate both the producers as well as those operating the exchange..

Think of it as YouTube, or maybe Spotify, for streaming data, only with a fair and standardized compensation plan.

This will likely start as a cottage industry, with hackers devising ingenious ways for unearthing new data streams, creating significant passive income along the way.

As an example, if a Mercedes mechanic takes it upon himself to add a series of 12 sensors to every vehicle he works on, he will create a unique data stream that he controls, one that many companies would be interested in subscribing to it.

But it’s more complicated than that. Each of the sensors would have to be placed in the exact same place on every vehicle, with the same level of accuracy. The data would have to be consistent, reliable, and somehow authenticated. Think in terms of adding a reputation management system to every one of these data streams.

At the same time, as technology improves, these data streams will have a limited shelf life. Over time, old ones will be replaced with newer ones, and what will likely start out as a cottage industry, will quickly turn into big business. 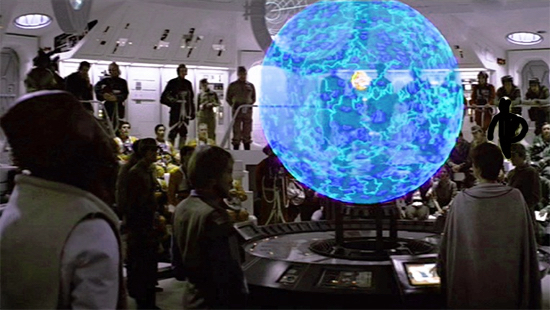 In addition to the obvious business applications that come from an information convergence like this, there will be many “global governance” opportunities that also come to light.

Again, for the purpose of this scenario, I’m envisioning a major global command center with a giant spherical display as a way to represent information geographically. Hence the name – God Globe.

With nearly infinite levels of detail available on the globe-screen, whenever an anomaly occurs, the team would first isolate and zoom in on the problem. Once the problem is understood, corrective actions will be put into play.

As an example, if weather conditions suddenly change near a heavily populated area, the God Globe will instantly calculate early-stage formation of a hurricane and map out the path it will be taking.

This information will in turn cause corrective actions to begin involving everything from redirecting space-based solar arrays to heat ocean waters, to fighter jet flyovers to disrupt airflow, to sonar cannons being used to blast cloud formations.

Since the very early stages of hurricane formation are easily disrupted, simple actions like this can have a profound effect. After each intervention attempt, the action will be automatically reviewed by the God Globe to determine if its been effective.

If we can solve problems before they occur, don’t we have a moral obligation to do so?

“If we can solve problems before they occur,
don’t we have a moral obligation to do so?”

One of the most important features of the Internet, that rarely gets discussed, is the heightened level of awareness it has afforded us. But we’ve only scratched the surface of where it will eventually take us.

Over time, we will be able to use this added awareness to halt some very negative things from happening. In this context it becomes easy to visualize a far better early warning system for detecting:

When it comes to spotting deviant behavior, we have the potential for intervening and removing the worst of the worst very quickly.

As awareness grows, so will our ability to predict, and once we can better predict, it becomes money well spent to intervene. Spending $1 million on an intervention could easily eliminate the billions it takes to clean up afterwards.

Some of you may be inclined to brush this off as little more than a scene from some future science fiction novel. But the potential for solving major problems seems far too important to ignore.

So please, let me know your thoughts on this matter. Is it realistic to think we will have a God Globe in our future? And if so, who pays for it, controls it, and who is in charge of curbing potential abuses?