The Half-Life of a College Education 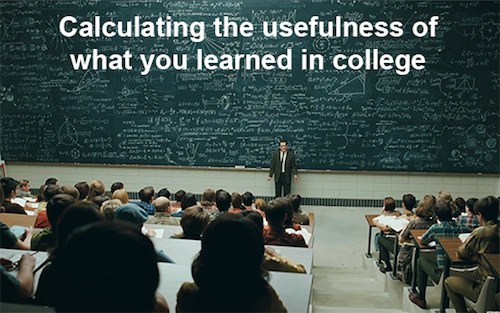 Last week I went through the process of analyzing how much of what I learned in college that I’m still using today. This ended up being a difficult thing to assess and quantify.

While most of my undergraduate coursework was focused on human factors engineering, I ended up taking several general courses like humanities, math, history, psychology, and accounting.

Looking over my classes, the three least useful courses were – how to use slide rules, Fortran programming (taught with punch card machines), and calculus, which I have never used. I certainly can’t say these courses were worth zero, but they hold very little value in my world today.

Putting aside my conclusions, it does bring up a much larger question: What skills are being taught today that will have little or no value in the future?

More importantly, as college costs escalate, and repayment plans extend for decades, does the usefulness of a college education wear out before the payments end?

Technology is blazing forward at a torrid pace making lifelong learning part and parcel to our ability to stay relevant. Education has value, but exactly how much value and for how long? And what happens to the massive debt incurred by students when the knowledge is no longer relevant?

Here are a few thoughts on how the massive changes coming to colleges are being driven by the decreasing half-life of education.

In the past, courses were created to fit the arbitrary timeframe of a school schedule. Quarters and semesters were devised to make the learning process more manageable from a scheduling standpoint. This was done largely to benefit the operation of the school, not the students.

Adding time and space requirements (i.e. classes are from 9:00-9:50 am MWF in classroom 254F) also made life easier for school administrators. Students needed to mold their lives around the demands of the school, because knowledge was a scarce commodity. As the owners of a scarce commodity, they made the rules.

Once the Internet began connecting the world, a variety of new possibilities started to surface, shifting the focus away from the institution to the needs of the student.

Today, knowledge is growing exponentially. In many fields, the useful life of knowledge is now measured in months rather than years. According to Cathy Gonzalez, in her 2004 paper on “The Role of Blended Learning in the World of Technology:

But not all knowledge and skills are created equal. Learning to read, do math, write proficiently, and speak eloquently are still highly valued skills in today’s world. Operating a slide rule, not so much.

Spending four years in a college to earn a degree is all part of achieving status. Only a relatively small portion of what is learned will hold long-term value.

Functional learning is comprised of the knowledge and skills needed to maintain functional relevancy in the world today. As an example, a person who manages a software company will find management skills useful throughout their career even though the software itself is constantly morphing and changing.

We develop functional learning in many ways, driven primarily by a current need. Most of the time, getting “credit” for something we urgently need to learn is only a distant consideration.

Yet, in our seemingly upside down world, colleges charge far more money for “status learning” where credits are assigned than the functional knowledge and skills that are often learned elsewhere. But all that is changing.

Groundswell of Change for Colleges – The Rise of MOOCs

Apple recently announced that iTunes U, their online compendium of free downloadable college courses, started in 2007, just surpassed the one billion downloads mark. Stanford University alone, has had over 60 million course downloads through iTunesU.

A full 60% of iTunes U downloads originate from outside the United States, coming from 154 different countries.

Coursera, a free online delivery platform for 62 colleges worldwide started in April of 2012, has already had 2.8 million students register for their classes.

Competing directly with Coursera is EdX, a nonprofit founded by Harvard University and MIT in March of 2012. They’ve recently added ten more schools to their partner roster and already have over 700,000 students who’ve sign up for their free courses.

Adding to the mix are a host of disruptive startups like Khan Academy with over 242 million course downloads, Udacity, and Canvas Networks.

The rapid shift to free any-time any-place online learning is forcing traditional colleges to rethink virtually every aspect of their operation.

Along with all the changes mentioned above, we are seeing a number of substantial trends emerging:

1.) Employer acceptance of non-credit courses – In 2011 Excelsior College and the Zogby organization conducted nationwide surveys of employers and hiring officials to determine their perceptions of online certificates and degrees. Nearly two-thirds believed courses taken online to be as credible as those through traditional campus-based programs.

2.) The coming price wars – Traditional colleges charge huge amounts of money, while the large online players offer their classes for free. Since the economics of free is not a long-term viable strategy, expect to see pricing battles emerge between key players.

3.) Rise of the Super Professor – As MOOCs become more sophisticated and closely monitor their analytics; every instructor will be assigned a star-power rating tied directly to their ability to draw a crowd. Much like in Hollywood, top professors will begin to retain agents in order to market their talent effectively.

4.) The demise of for-profit colleges – Colleges have a way of instilling loyalty among their students, but less so for colleges without physical campuses and even less so those whose primary role is to make money for shareholders. The fallout has already begun.

5.) Shrinking course lengths – With time and place requirements going away and time constraints of students becoming an overriding concern, look for course lengths to shrink to their absolute minimum.

To be sure, there will never be a one-size-fits-all solution to education in the future.

Over 35 million people with student loans in the U.S. now owe over $1 trillion and much of what’s owed is for knowledge and skills no longer pertinent in today’s world.

If this debt were collateralized by factory equipment, the unusable portion of the debt would be quickly charged off as uncollectable and the loan officer in charge of lending the money would be severely chastised.

Student loans, however, fall into a different category. They are easy to get and Congress has chosen to classify these loans as “non-dischargeable” in a bankruptcy.

As MOOC courses apply downward pressure on the cost of tuition, and constant refresher courses become part of everyday life, a number of friction points will emerge surrounding this increasingly uncollectable debt mass. Students will claim they were conned, and societal pressure will mount against the “too easy to get” loan system.

Tightening the loan system alone will cause many colleges to go out of business.

When we think about what college education will look like 20 years from now, the mounting number of variables make it impossible to predict. But in general, education will become more readily available, at an overall lower price, and come in more flavors and varieties than ever-dreamed possible.

For those who love to learn, there are good reasons to be optimistic. But for those mired in debt and still struggling to compete, the better-life dream is still a few system changes away from reality.