The Future of Non-Lethal “Weapons” 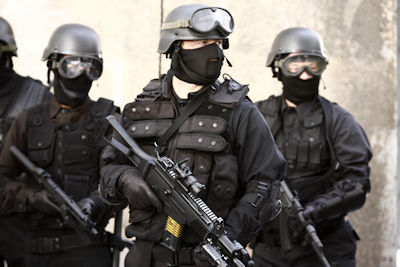 The first time I watched Star Trek and heard Captain Kirk calmly instruct the crew to – “Set your phasers to stun” – I wondered just how many more settings those weapons actually had. Was it just a simple two-position switch with “kill” or “stun,” or were there additional settings that were less than lethal?

For this reason, I came up with 10 other settings that could be employed to handle the situation:

Whether you’re a Trekkie, a Trekker, or just a person with an imagination, I’m sure you can come up with a few more options.

These days, though, we’ve been reminded that some policing tools are out of sync with certain policing situations. Lethal bullets are a last resort, of course, but even tasers, rubber bullets, pepper spray, water cannons, and pepper balls can escalate a situation and cause injuries or even accidental deaths. There’s a time and place for each of these, I’d say, but we also need to expand our thinking.

What we need, maybe, is a non-confrontational weapon-tool that simply immobilizes a person and doesn’t escalate the situation – a temporary “off-switch” for their brain, something that allows an offender to be safely removed from the situation. I’d be willing to bet our military is looking into this!

When law enforcement can only rely on weapons to stop illegal behavior, the fall-out and consequences can expand. When it comes to guns and less lethal weapons, the finality of death and the potential escalation should and do give police officers pause before they employ them.

There’s a similar debate when it comes to international relations. Very often we see bad actor nations and international groups seizing territories, enslaving people, killing those with different ideologies, and taking other aggressive domestic or international steps. If our only strategy is to stop them with military force, we risk igniting the kind of conflict and casualties no one wants. So, enlightened nations hold their fire, if not their tongues, and these leaders or rogue groups become emboldened to take incrementally aggressive steps.

As a result, and somewhat ironically, powerful and honorable nations are too often powerless to stop bad actor nations if all they have at their disposal are weapons. Former U.S. Secretary of Defense Robert Gates addressed this situation in his recent book, Exercise of Power. He points out that nations must rely more on things like diplomacy, economic instruments, communication, technological advantages, and other tools to influence the actions of malevolent international powers. That’s because all too often military force is not an option – it’s the kind of all-or-nothing response no one wishes to unleash except in the most compelling cases. And since we can’t put all our eggs into the basket of military force, we also need to put in the hard work necessary to develop other tools of influence.

When it comes to limiting or pre-empting certain illegal domestic behavior, we shouldn’t always rely on law enforcement solutions that can escalate the situation. We need to put in the hard work to develop certain other tools and strategies. We also need to be able to set the phaser to “good jobs,” “access to education,” “equal economic opportunity,” and “fair economic competition.”

← Foresight Journaling: We Can Help You Unlock the Secret Truths to your Hidden Vision Can Social Media Survive? Is it Worth Saving? →
Tags: future technologies, non lethal weapons