When will we see the first space hotel? Some would say we have the prototype right now at the International Space Station (ISS). Astronauts working there have their own phone booth-sized sleeping quarters with room for their laptops and other personal items. NASA has announced it would sponsor tourist visits to the ISS where they’ll stay in attached modules currently under design and development.

In fact, though, seven space tourists have already traveled to the ISS for one-to-two-week visits, booked through a U.S. company called Space Adventures, which purchases unused seats on Russia’s Soyuz spacecraft. It’s been a decade since the last tourist visit, but a Japanese fashion designer and his photographer have booked a ride for December of this year through that company.

But when we think of space hotels, that’s not really what comes to mind.

Two years before mankind set foot on the moon, in somewhat of a public relations campaign, Barron Hilton was talking about his Hilton company placing an Orbiter Hilton in the earth’s orbit and a Lunar Hilton on the moon – or at least under the moon’s surface. The plans were long on imagination and short on solutions. Pesky matters related to water, oxygen, and weightlessness in those environments had yet to be fully explored, let alone solved.

But the imagination was the fun part – and the part the public wanted to hear about. Hilton presented sketches of cocktail lounges and bars in his out-of-this-world properties. He described how guest rooms would seem very similar to those in earthbound Hilton properties. The public loved the idea, and many people wrote to the company asking to make a reservation.

From Imagination to Reality

Over the next 50 years, NASA and other national space programs worked steadily to solve those problems related to sustaining life in outer earth orbits. And in the last decade, the private sector companies of space travel pioneers like Elon Musk, Jeff Bezos, and Sir Richard Branson have made major leaps in space transport technology.

Many companies are vying for a piece of the future space tourism industry, promising everything from edge-of-space, sub-orbital flights to extended-stay orbiting hotels.

And in the hotel category, we’re seeing plans for luxurious, modest-sized, four-guest properties like the Aurora Space Station by Orion Span, all the way to the Gateway Foundation’s Voyager Station with room for 400 guests.

The Voyager Station property will have 24 modules rotating slowly like a wheel to provide gravity equivalent to that of the moon – so we can all bounce around like Neil Armstrong and subsequent moonwalkers or so that some of the more athletic can dunk like an NBA All-Star. Orbital Assembly Corporation will handle the space construction for Voyager Station using robots. 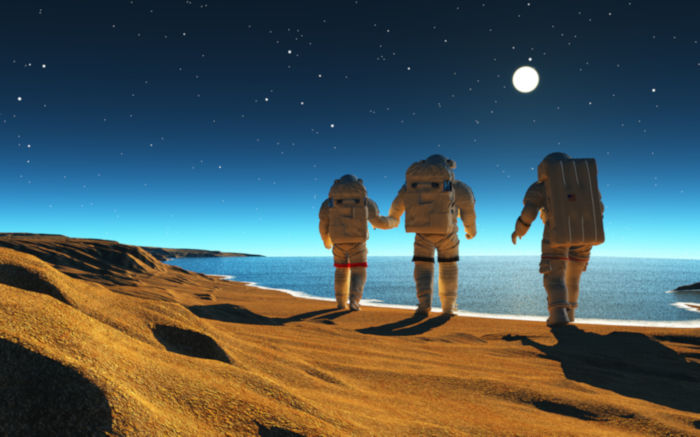 The images that Barron Hilton put in our minds in 1967 seem far more realizable today as we envision space hotel vacations. Instead of an ISS, think of these space hotels as earth-orbiting cruise ships.

Similar to an ocean cruise experience, the first matter of business for new arrivals at the orbiting hotel will be a safety drill. Attached to the sides of the core of the structure there will be multi-passenger escape ships. Instead of learning how to put on a water flotation device, guests will learn how to quickly step into and zip up their flight suits. Pilots of these escape pods will always be on board, most serving as crewmembers with other duties on the hotel airship.

The interior will be warm and inviting, a far cry from the sterile walls and halls we saw in 2001: A Space Odyssey. In fact, one scene in that movie took place in the lounge of an Orbiter Hilton hotel – a very appropriate and subtle homage to Barron’s vision and PR prowess.

Guests will be able to sign up to don a space suit and be attached to a 10-foot tether near the slower rotating core area of the structure and go for a spacewalk. I don’t think we’ll see skeet shooting – there’s no stern to safely point away from, and a purposeful or accidental errant shot could be disastrous to the entire structure.

Expansive windows will be everywhere – in guest rooms, the dining room, the cocktail lounge, and even the small half-court gymnasium.

The workout facility will be placed at the outer reaches of the spinning structure, where the gravity will be strongest – although still not as strong as on Earth. Treadmills will come with tethers for people who bounce just a little too much in their running gait. Friends will snap pictures of other guests to document weight-lifting feats that would not be possible for them on Earth.

Day and night will essentially be meaningless given the space cruise ship’s continual orbit and the day-night cycles of less than two hours. It will take a visitor one or two 24-hour days of adjustment until they get used to having breakfast while watching a far-off meteor shower and having an “evening” cocktail while watching the sun rise. This Las Vegas-esque sequence could very easily be reversed the next 24-hour day.

What will this vacation cost? If you have to ask, you probably can’t afford it. Early on, just the trip to the orbiting hotel in one of Branson’s, Bezos’, or Musk’s vehicles will likely be in the six figures. However, with further technology breakthroughs and as new economies emerge, you can expect that this entire trip might be more in line with a three-month, first-class sea cruise.

Remarkable innovation and breakthroughs in space transport and construction are making all of this possible. I’m not convinced the Voyager Station will be checking in guests in 2027 like promoters claimed earlier this year, but it’s amazing to realize that this could happen even before the end of the current decade.