The Black Hat Robots are Coming

The Black Hat Robots are Coming 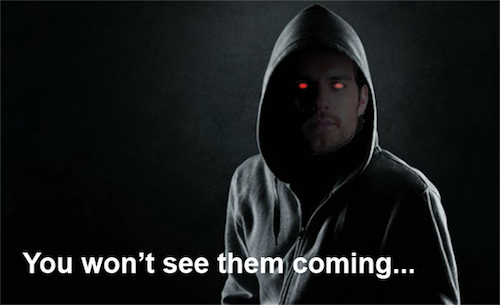 But then it should really come as no mystery. Machines are far superior to people. Every worker brings their own set of baggage to the workplace, and officials have created countless laws to protect these workers, making the human side of work messier than ever.

For most companies, the daily headaches of managing employee-related issues, complaints, and lawsuits has most executive teams longing for a more manageable situation, and if automating employees out of their jobs is ever an option, they’ll jump on it in a heartbeat.

Discrimination is fine as long as it’s with a machine.

It’s no wonder that Uber, boasting a $50 billion valuation after recruiting literally millions of drivers over its short 6-year lifespan, is now investing heavily in driverless technology to eliminate the very drivers the company was built on.

But Uber is not the only one. In China’s manufacturing hub in Guangdong province, a team has begun constructing the first zero-labor factory, with plans for 1,000 robots to work on their workerless assembling line.

Taking this line of thinking a few steps further, we are on the verge of having driverless busses delivering automated store clerks to retail shops that sell robots to other robots. Hmmmm.

So where do humans fit into this equation? Much like handing us a shovel and asking us to dig our own grave, our man-made machines are being replaced with machine-made machines, to replace the workers who made them.

No longer the realm of science fiction, we are less than a decade away from workerless factories, robots with their own bank accounts, Watson-like judges dolling out sentences in court, and having wars filled with robots fighting other robots.

Does anyone else see the massive ethical dilemmas looming in the background?

But before you go off and organize a team hell-bent on banning robots altogether, let’s take a closer look at the opportunity side of the equation. 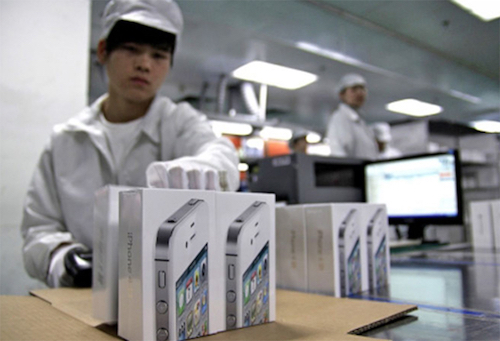 Foxconn is the largest manufacturer of electronics in the world, employing well over 1 million people in its factories. They’re perhaps best known as the manufacturer of the iPhone and iPad.

In 2011, because of the rising cost of Chinese labor, Foxconn CEO Terry Gou made the bold assertion they would install a million robots in their assembly lines with plans to eliminate a significant portion of their workforce. But so far that remains an elusive dream.

While many of the $25,000 robots have been installed, they do not live up to the exacting standards Apple demands. Instead of replacing workers, the bots have been relegated to tighten screws, polish metal, and handle packaging.

Last month, Terry Gou revised his projections, saying the company would need 3 more years to automate 70% of its assembly line. Sticking to its original vision, he said the shift would replace people with machines and improve efficiency.

At this point its impossible to know if three years is a realistic timeframe and what percentage of the workforce, if any, will actually be replaced.

Like many other creatures in nature, humans are hardwired to be socially dependent. We need each other.

Even though we can make machines that are far more durable and reliable than humans, there are no perfect machines. They will all eventually break down.

For the first 50 years after automobiles were invented, car-owners were forced to carry a toolbox along with them to make repairs along the road whenever something broke down.

Even with hundreds of years of machine-building under our belts, implementing countless new quality control programs like TQM, Six Sigma, and ISO 9000 certification, and our ability to design far better pieces of equipment than ever before, we will never be able to achieve a failure rate of zero.

As we add more and more technology to our lives, we will also be adding far more failure points.

To better illustrate this point, we’ve had countless examples of disasters happening throughout history, even when our best and brightest were involved in the decision-making.

Here are ten of the world’s worst disasters, with many still being cleaned up.

1.) Fukushima Nuclear Power Plant – On March 11, 2011, a nuclear meltdown of three of the plant’s six nuclear reactors was caused when the plant was hit by a tsunami triggered by a massive 9.0 earthquake. The following day, substantial amounts of radioactive material was released, creating the largest nuclear incident since Chernobyl. Over 300,000 people had to be evacuated.

2.) The Disappearance Of The Aral Sea – One of the largest lakes in the world, that once covered 26,000 square miles, between Kazakhstan in the north and Uzbekistan in the south, has been shrinking since the 1960s because of water diversion for Soviet irrigation projects. Satellite images taken in August 2014 showed the eastern portion of the Aral Sea is completely devoid of water, and is now referred to as the Aralkum desert.

4.) Pacific Garbage Patch – The Pacific Garbage Patch is a vortex in the Pacific Ocean that has collected marine debris like plastic, chemical sludge and other garbage. It extends over a large area, but much of the detritus is trapped below the water. Estimates of its size range from 70,000-15,000,000 square kilometers. Predicted by National Oceanic and Atmospheric Administration (NOAA) scientists in a 1988 paper, researchers have since discovered other huge concentrations of oceanic trash vortices in both the North Atlantic and the Indian Ocean.

5.) Sinking of the Titanic – Going down on its maiden voyage from England to the United States in 1912, the Titanic was known as the unsinkable ship. With no small amount of boasting, the ship was specifically designed to make the long journey to America with no possible chance of sinking.

6.) B-2 Stealth Bomber Crash – In 2008, on a practice flight in Guam, America’s most expensive jet was destroyed when faulty sensors caused it to pitch up on takeoff, stall and crash, according to the Air Force. The B-2 stealth bomber, only one of 21 in existence at the time, cost $1.4 billion.

7.) Exxon-Valdez – In 1989, an Exxon oil tanker was on its way to California when it hit the reef near Prince William Sound off the coast of Alaska. The tanker spilled over 760,000 barrels of oil into the water off the Alaska coastline.

9.) Hindenburg Explosion – The Hindenburg disaster took place on Thursday, May 6, 1937, as the German airship caught fire and was destroyed during its attempt to dock in Lakehurst, New Jersey. 36 people died in this explosion.

10.) Bhopal Disaster – Considered the worst industrial accident in history, on December 2, 1984 at the Union Carbide pesticide plant in Bhopal, India, over 500,000 people were exposed to methyl isocyanate gas and other chemicals. The toxic gas filtered into several of the shantytowns surrounding the plant. The government of India reported 558,125 injuries, with estimates of over 16,000 deaths.

The list above could easily be extended to include other catastrophes like Chernobyl, Three Mile Island, Deepwater Horizons, Hurricane Katrina, Love Canal, and countless more. 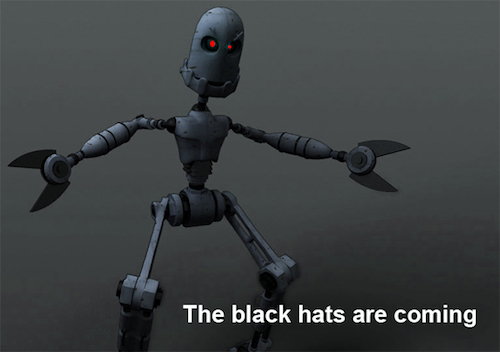 It’s not reasonable to think that we will somehow reach an era of being disaster free.

Machines wear out, computers break down, and even our best attempts at making a failsafe system will eventually fail. Add in a few earthquakes and nature’s own mechanisms for disrupting things when we least expect it, and we get a sense as to how fallible our future will be.

So who will be left to pick up the pieces? Just us lowly humans.

With our growing imbalance between the super rich and the super poor, a more likely scenario will be a scaling up of techno-stealth warfare of the clandestine kind, with black hat technologies used to disrupt our systems, industries, and government in unusual ways.

In case you’re not familiar with the term, “black hat” refers to hackers intent on being disruptive, malicious, and stealing for personal gain. Until now black hat hackers have been limited to the programming world. But that’s about to change.

One slightly deranged psycho-bot can easily be a thousand times more destructive than a single suicide bomber today.

Even in a society filled with cameras, tracking technology, and data trails as wide as a barn, every new generation of techno-hacker has devised ways of masking their path of destruction.

On the high end of the spectrum, they predict telemarketers have a 99% chance of one day being totally replaced by technology, with cashiers, tellers and drivers all coming in with at 97%.

The jobs with the lowest potential of being overtaken by technology include mental health and substance abuse social workers. They have a 0.3% chance according to the data. Occupational therapists also rank at 0.3%, while dentists, surgeons and nutritionists appear pretty safe at just 0.4%.

That said, even the researchers that conducted this study for NPR admit that their estimates are rough and likely to be wrong.

History is filled with jobs that no longer exist. Whether it was pinsetters for bowling alleys, milk deliverymen, lamplighters, or switchboard operators, technology has a way of changing the work we do.

The biggest risk we face is in alienating the same people that will have to come in later to clean up after all the messes we make.